We needed a long run today, so we decided to run the Falcon Trail at the Air Force Academy. This would be only our third time to run it completely so we are just starting to get a feel for what our pacing should be for the loop. We had rain off and on since Wednesday night, which we desparately needed, so it was very humid today - abnormal for Colorado. 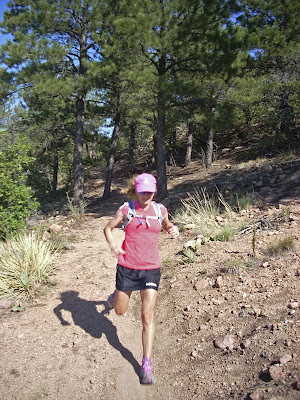 Surprisingly, the trails had soaked most of the water with hardly any ruts from water runoff -not bad for soil that has not had measurable rainfall since April or May. What was also nice was that the dust and loose gravel was mostly packed and the air was fresh. 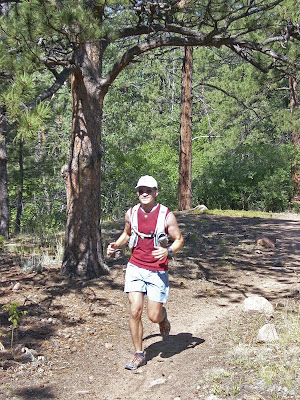 We ran the course in the clockwise direction but we still are not sure which direction is "faster". It was interesting to pass a couple sets of mountain bikers on the climbs but not get passed by them on the following downhills. That must mean our slow pace is less slow than it used to be! (or there were just slow bikers out today...) We saw the manager of our favorite bike shop go by in the opposite direction we were running and he even recognized us running - cool! 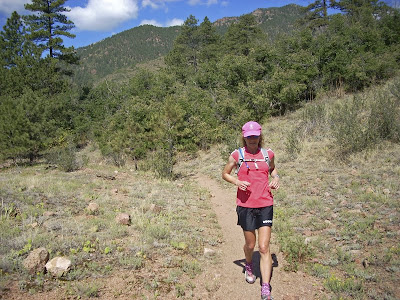 It was odd to not have our normal creek crossing. They obviously have diverted the stream in a different direction because it would have been flowing well today after all our rain from the previous two days. You can see mostly blue sky behind Kathleen here, about 5 miles into our run. That would change before too long. 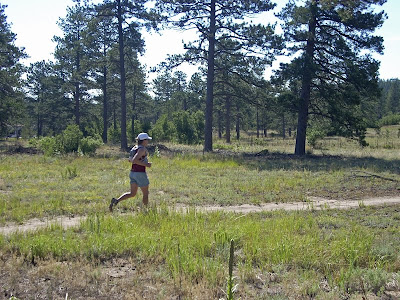 The grass seemed to have instantly responded to a much needed drink as all of the brown meadows had come back to life. August is typically monsoon season for us (as in there is measurable rainfall) but the last few summers it has been nonexistent. We're hoping that we get back to normal this year as we had been on pace for the driest year recorded to date. 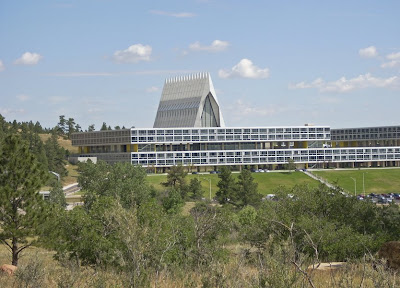 Here is a nice view of the cadet area, with the renowned chapel standing in the background. This is about 7.5 miles into the route and is a welcome sight because it signals only one climb left and then mostly downhill to the finish!!! Anyone who has a chance to visit our area should certainly try to see the Air Force Academy. It is much more restricted access since 9-11, but it is worth the visit. 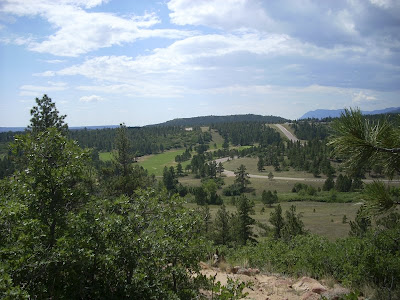 The golf course has responded well to the rain - the fairways were definitely standing out against the views through the evergreens. In this photo you can see the clouds beginning to come in from the west, earlier than usual today as this was before noon. We were certainly noticing the effects of the humidity by this point in our run. The legs felt a little heavier than normal and we had a thick sweat that just would not evaporate - yuck! We'll take our thin, dry air thank you! 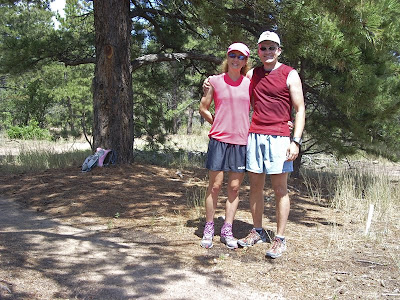 All in all, we don't look too bad after finishing the 13 mile loop. That distance seems to be our ceiling for right now but we're OK with that. For a couple of mountain bikers that decided to get into more trail running, we're doing just fine! As for the clouds, they chased us home and it poured rain within half hour of arriving at the house - perfect timing!!! We had a very satisfying day on beautiful trails - definite Good Times. Kudos to the USAFA for totally rebuilding this trail in 2006 after years of neglect - it is a Gem!!
Scribed by HappyTrails at 4:38 PM No comments: