Can we go back to Christmas?

... OK, so not really go back to Christmas and start over or anything.  But maybe go backwards from today on the SD card in the camera and see what's been going on.  Sort of like a photo dump with commentary.  Aside from a few periods of Old Man Winter showing his mug, it has been extremely non-winter weather here.  While this is premium for outdoor enthusiasts (except skiers) who need their weekend fix in the great outdoors, it is really, really super uncool for our heinous drought scenario. However, since we are in no way able to control the climate, might as well capitalize on the bodacious weather and maximize the outdoor time!  Beside that - and without mentioning any names of people in Vermont or Oklahoma - we have been under a bit of outside pressure to get some stinking pictures up - so here we go!

Sweet Ride on Falcon Trail
So we have been mixing it up with trail running and mountain biking, and it has been working out really well.  Today, with highs forecast in the upper 50's, we headed over to the Air Force Academy to do some riding on the Falcon Trail.  We were hoping that a bunch of the snow from our last trip over there was gone, and sure enough it was.  We started at the stadium and headed clockwise.  Instead of riding it as a loop, we had a plan today to get some extra mileage in. 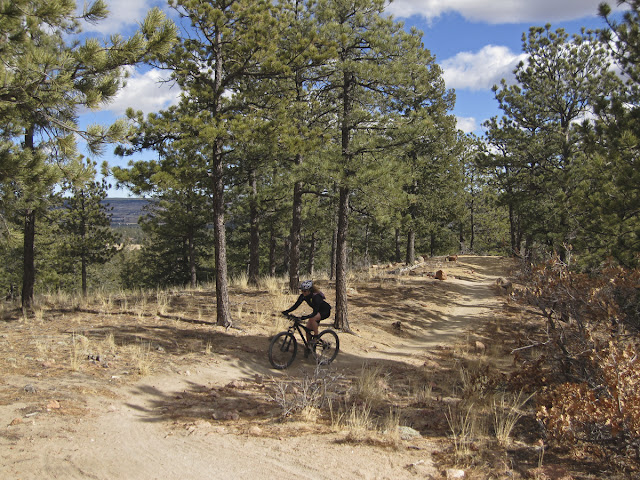 Kathleen climbs out just below the BX and Community Center 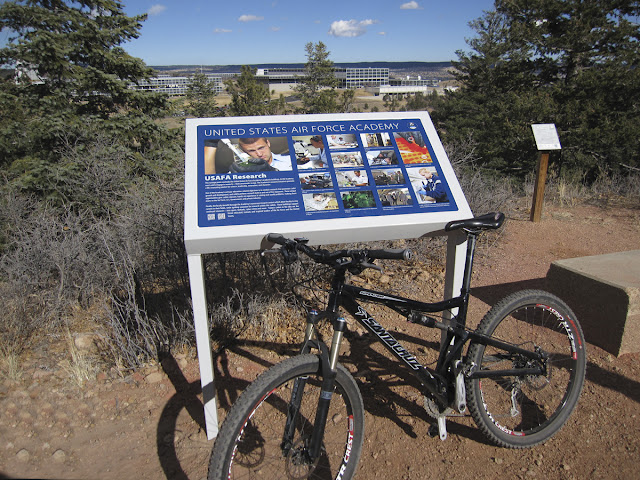 New display at the Chapel Overlook 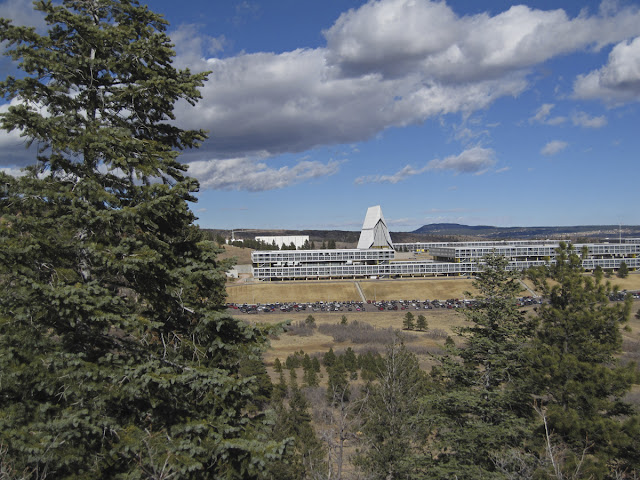 The Chapel and cadet commons

So we rode clockwise around to the Chapel overlook, which is at mile marker 0, the official trailhead.  However, for us it was already mile 8.  We turned around here and headed back the way we started.  We were hoping to avoid the last remnants of snow on the north end, extend our riding mileage beyond the standard 13 mile loop, and cash in on the super sweet descent off the back side - the one we had just grunted our way up a half hour earlier! 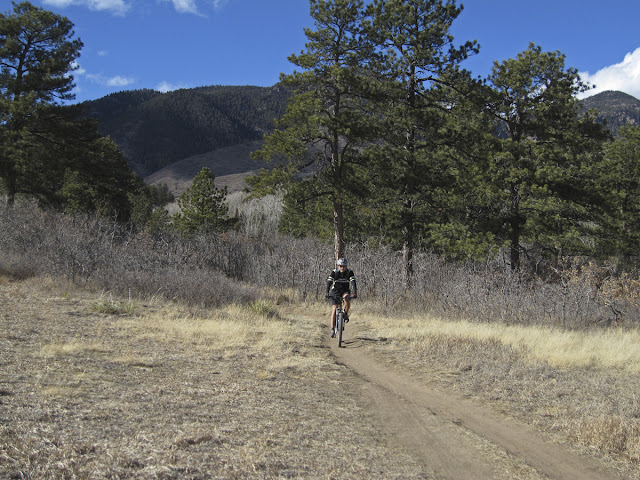 As expected on an awesome day like this, traffic on the trails was quite heavy.  In fact, there was more traffic today than any time I remember on Falcon Trail during all of last year!  By the time we circled back to the stadium lot, it was in the upper 50's and just fantastic outside.  (Sorry east coast frozen people...)  We just couldn't stop, so we rode past the lot and headed around the trail past the golf course and around to the first road crossing on the north side of the course.  We turned around here and had a blast flying through the singletrack in wide open meadows to the east of the course - which by the way had plenty of activity today!  We rolled up to the truck after 21 miles of sweet trail riding with big grins on our faces.  Yep - this weather is bogus for January in the mountains - but man are we enjoying it while it lasts!!  Between today's ride, a Monday ride (and run = brick), and last Sunday's ride at Cheyenne Mountain State Park (sorry, no camera), Kathleen got in over 60 miles on the mountain bike - 3 technical trail rides in a week - sweet!

Saturday Run at Garden of the Gods 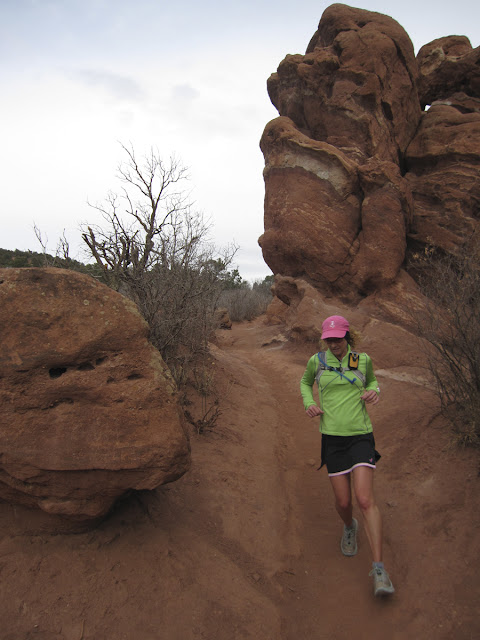 Kathleen cruises past the Giant Footprints
Yesterday, I headed out the door for the Garden of the Gods, with Kathleen planning to meet me at the park to start her run.  This allowed me an extra 5 miles without Kathleen having the pressure to go too long on the run.  While it was not too cold out, it was pretty gray most of the day which wasn't real fabulous for the motivation.  But 50's in January is what it is, so quit whining and run, right? 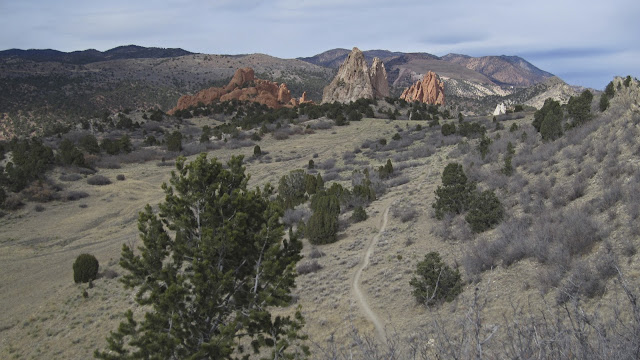 And why would you NOT want to run here??? 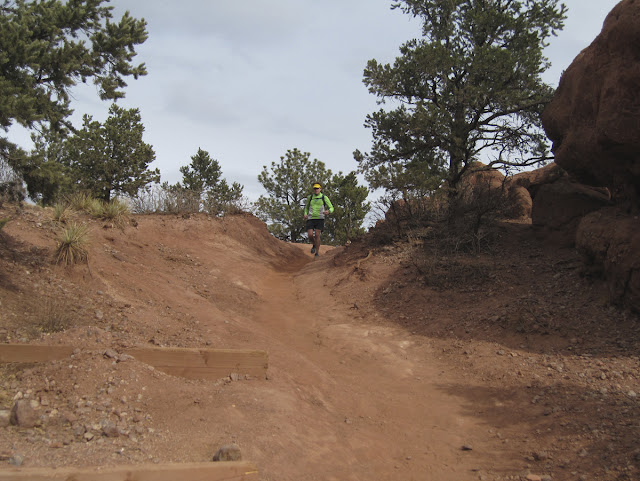 Oddly, trail traffic was light and we were able to cruise at will, circling all of our favorite spots in the park.  Kathleen was shooting for 10 or 11 miles, which was perfect as 15 or 16 is about my top end at this time of year.  While we were both tired, it was again hard to peel off the trails with such unbelievable temps in winter.  We stopped in to see our favorite crew at the neighborhood Starbucks and then kicked it for the rest of the day.  With a boatload of people sick around here, we made certain to stay out of crowded (aka germ factory) areas as much as possible this weekend!!

Back a couple weeks

Just so you don't think we're getting all cream puff weather this winter, we did have this spell a couple weekends back - can you say "ride the indoor trainer"?  Two words - butt cold.  Glad it's over.  For now..... 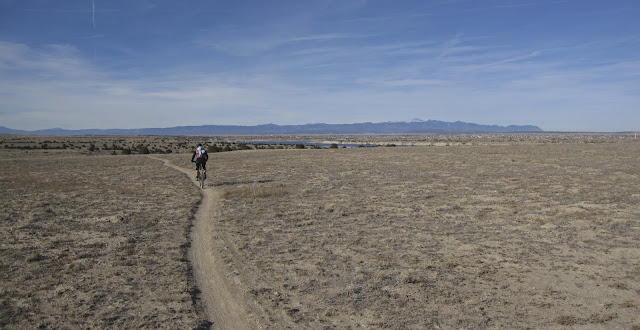 Kathleen riding out the mesa on Voodoo Loop

Back a few weeks, we took advantage of some sunny weather to get some time in at Pueblo Reservoir.  New Years weekend, we spent a couple days down at the desert oasis mountain biking with friends (just over 50 miles on Sat/Sun) and going for a long run on dry trails after some quick snowstorms left the home trails a little snowpacked.  So the next weekend, we were itching to ride again and headed back.  The quick 1 hour drive is easily justified when dry singletrack - miles and miles of it - await your tires and/or trail shoes. 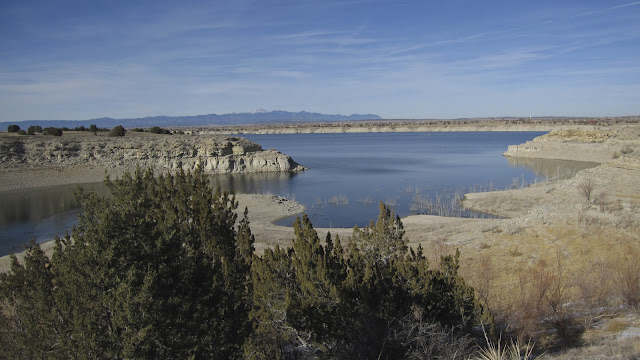 Western end of the trail system ... for now

We have been to Pueblo quite a few times for a winter get away but had never been on the newest loop - Voodoo - which is the farthest trail loop to the west.  From what we hear, there is yet another loop in the works for the next mesa west of Voodoo - holy trail stash Batman!  So we made a point to head straight for Voodoo to start the ride and it is an absolute blast.  It has some fast, open stretches that are really made for the bike, but might be a bit "out there" for running.  We'll report on that the first time we get back there to run the loop.  It is awesome riding - long wide open stretches of twisty singletrack, punctuated with typical desert riding in and out of drainages and arroyos.  There really are no long climbs at Pueblo, just a lot of punchy, leg draining ups and downs - hardly any flat areas. And lots of loose, broken shale - can be a bit tricky to ride or run.  The shale is noisy, too. 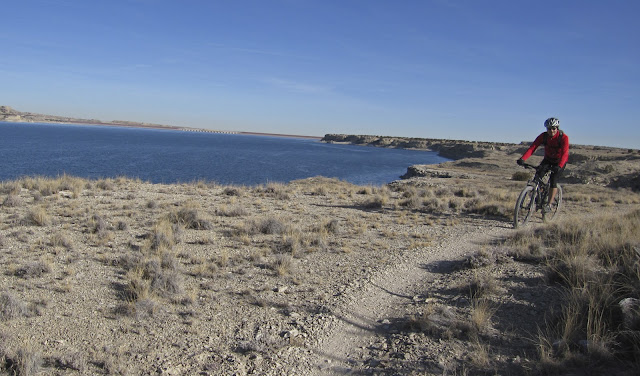 Steve on the Outer Limits Trail 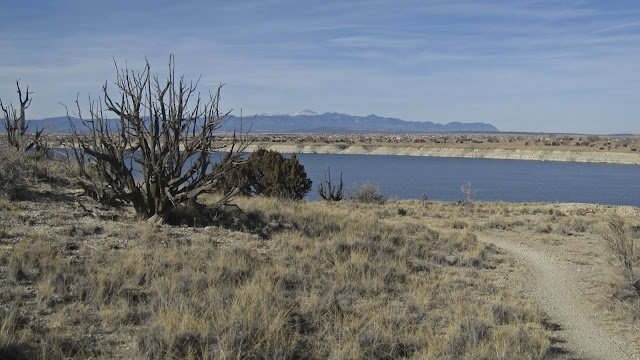 Looking north across the reservoir, with Pikes Peak 50 miles to the north 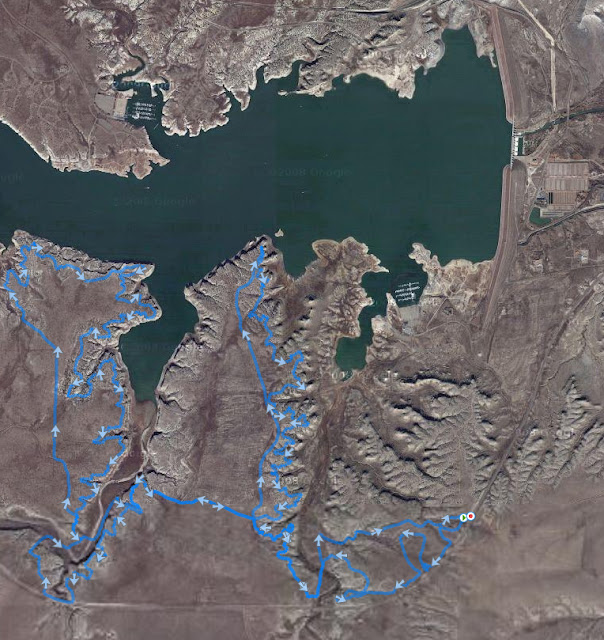 We had a blast riding our legs off, eventually calling it quits after 28 miles of splendid desert trails.  While there are several mountain biking races held here, we are really surprised that there are not any ultra trail races held here.  It would seem to be a great early season ultra with the mild weather Pueblo generally receives.  Anyway, we had a great ride and really enjoyed the dry trails in the middle of winter.  There is a pretty good chance we'll be back down before it gets blazing hot - both to run and ride these awesome trails.

Christmas in the Park 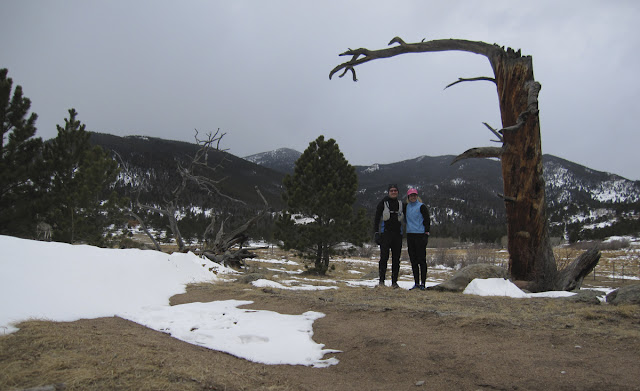 And now for that whole Christmas thingie - We generally do not go anywhere at Christmas, as in years past we have had limited time off work and most often also have family in town.  This year, no family in town and 10 days off between Christmas and New Years holidays meant we had a little freedom to roam.  So we booked our favorite spot in Estes Park and spent Christmas in the quaint little town at the east portal to Rocky Mountain National Park. 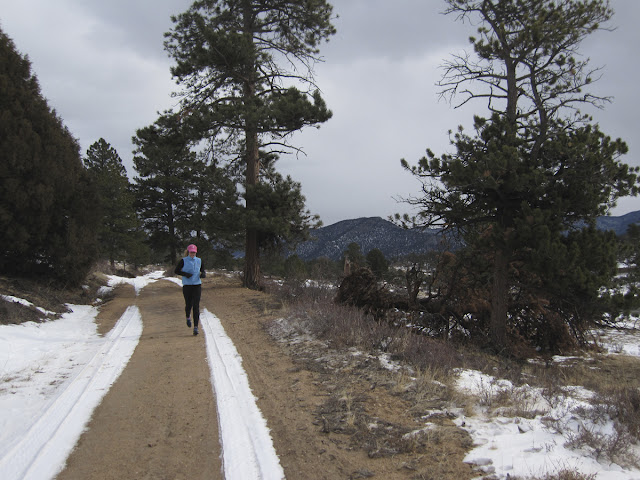 We were unsure of how much recreation we wanted to plan while in Estes Park.  We did not even bring snowshoes due to the poor snowpack so far this year.  Christmas Eve, we headed over to the park to get in a little trail run.  Little being the key word since it was 17 degrees and windy - well, it is always windy in Estes Park...  We started at the visitor's center, took the service road out to the trail junction, and ran the trails in Beaver Meadows.  While there were some nice stretches of dirt, there was also a fair amount of running on crusty snow and a wee bit too much post-holing through windblown and drifted sections.  It was good to get out and stretch the legs a bit and we rolled up 9 miles before calling it a day.  With snow in the forecast for Christmas Eve night, it was looking like a white Christmas for the first time in many, many years. 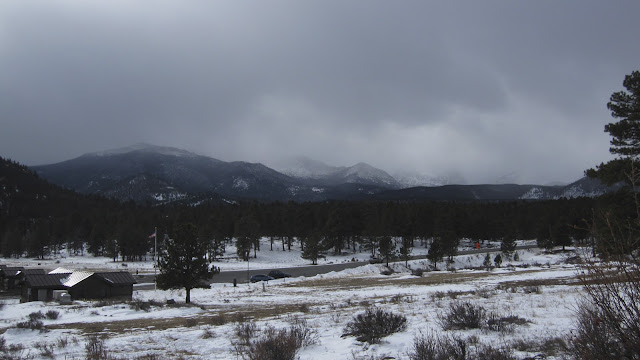 Finishing up the run with weather moving in 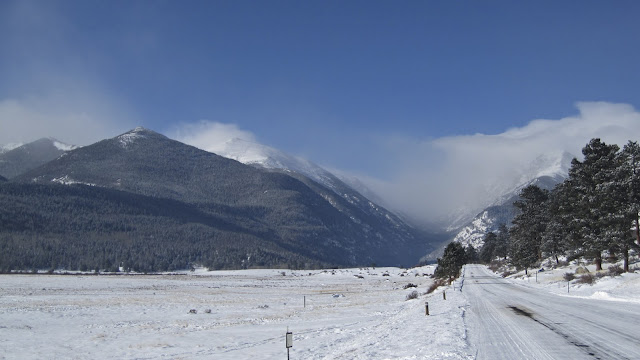 Sure enough, the weather moved in and delivered 6" of fresh snow, leaving behind brilliant blue skies and numbing temps to start Christmas Day.  We decided to get out and enjoy a drive in the national park to check out the freshies - it was magnificent. 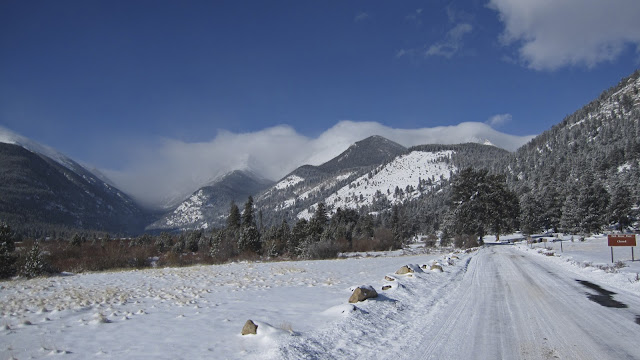 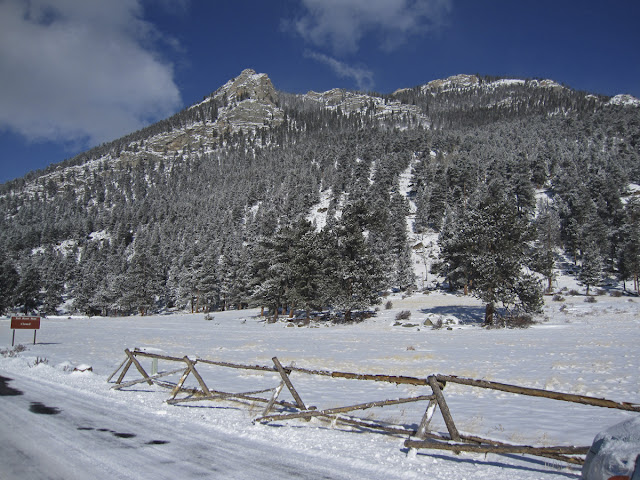 Horseshoe Park, looking out toward the Alluvial Fan area 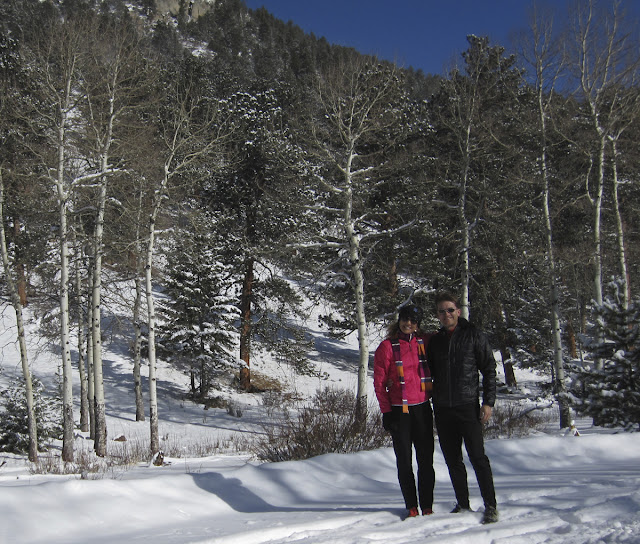 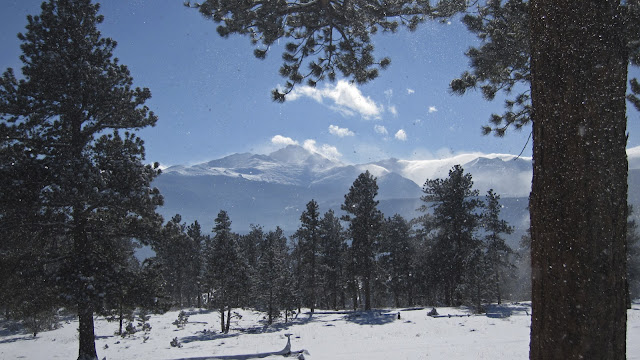 Thanks for checking out the time capsule - Happy Trails!
Scribed by HappyTrails at 9:15 PM 11 comments: