Awakened again (after sleeping in - gotta love Fall!) by brilliant sunshine, we decided to head out to the Mount Herman USFS work center in Monument to run trails we have not been on in a while. We got out late because someone (?) was watching the cycling worlds on the internet ... Good job Cadel Evans of Australia (a former mountain biker)! 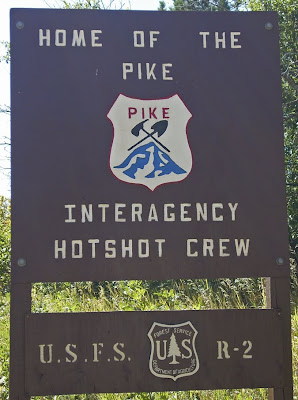 This area is the home of Pike Interagency Hotshot Crew, one of 5 such groups in Colorado. These are some courageous frontliners that specialize in wildland firefighting, often dropped in to the most dangerous hot spots. If you live in the West and have had wildland fires, you may have had some folks centered here fighting your fires. The cool thing for trail users is that these men and women cut practice fire lines (think singletrack) in the Pike National Forest surrounding their work area - SWEET! They cut such nice trails that this is now trail central for horse riders, mountain bikers, and TRAIL RUNNERS who all want to utilize their sweet network of narrow dirt trails! 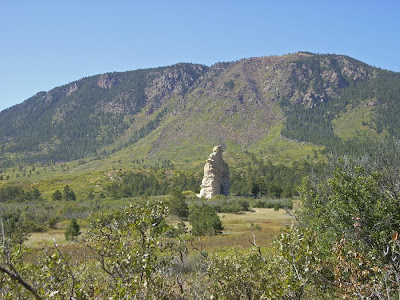 Monument Rock stands in the center of a huge meadow in the middle of the work area. 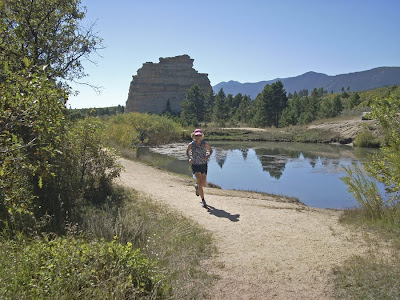 Kathleen cruises past the pond at the base of Monument Rock. This is a popular swimming hole for canine trail users in need of a cool down from their efforts! It is quite thick with moss and algae, so we choose to cool down elsewhere. 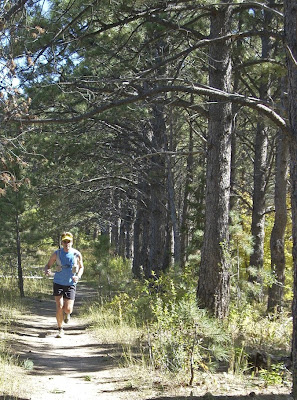 The trails weave in and out of several drainages and alternate between large groves of majestic pines and almost prairie-like open spaces. While it was a bit warm in the exposed areas, we were more than content to be sweating after Monday's blustery highs in the 30's!! 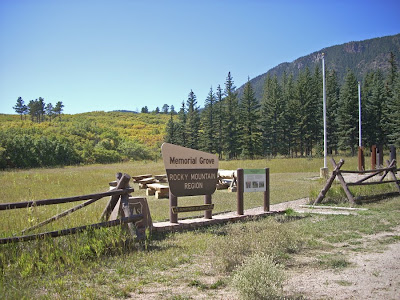 Out on the southwestern corner of the work center, there is a memorial set up for fallen USFS regional employees. The log benches in the background are for the ceremonies held each year to add names to the memorial. 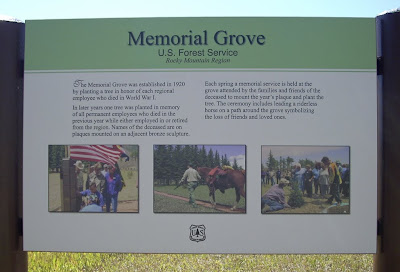 Placard for the memorial site. 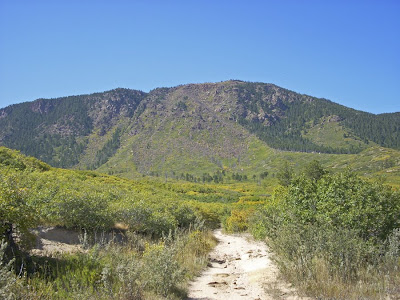 Mount Herman stands tall behind our trail. This large area at the base of the mountain which is now covered in Gamble Oaks, was the site of a large fire in the 90's. Most of the burn is indistinguishable now if you did not know it had been there. Ironic location for a wildfire, eh? 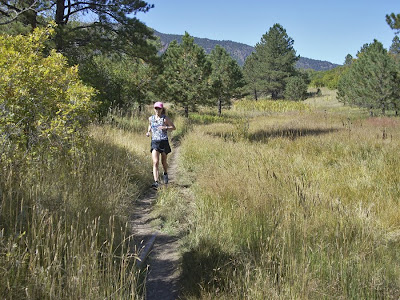 Kathleen emerging from the trees into one of the large meadows. With our wet summer, there were areas that the weeds were thick enough that you could not see your footing ahead - scratchy legs, anyone? 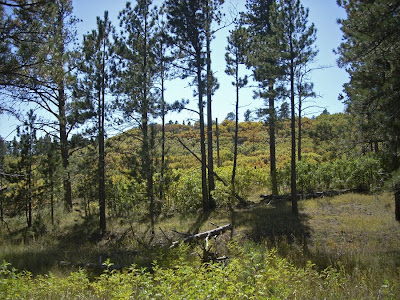 Some of the fall color is starting to show in the Gambles - the north facing hills were blankets of orange and yellow today! 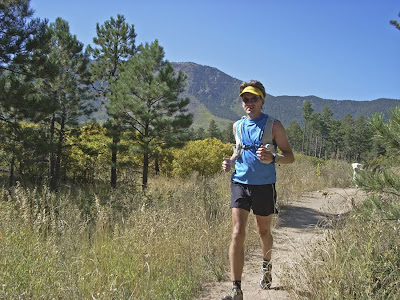 We had just passed a woman and her extremely friendly large poodle a ways back, and as Kathleen stopped to snap a photo, he came flying down the trail behind me - look at the "grin" on his face. I guess he was born to be a trail runner, not a hiker!!! 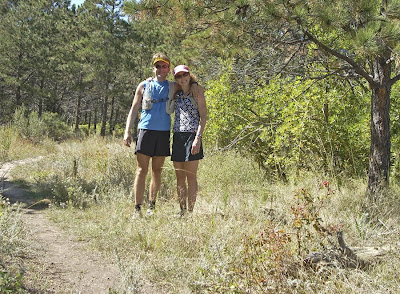 Days like today are why we LOVE Fall in the Rockies - we had not a cloud in the sky all day. Nothing but bright, blue sky and wonderful sunshine. I guess that's why we tolerate snow in September - take the good with the "cold" I guess! 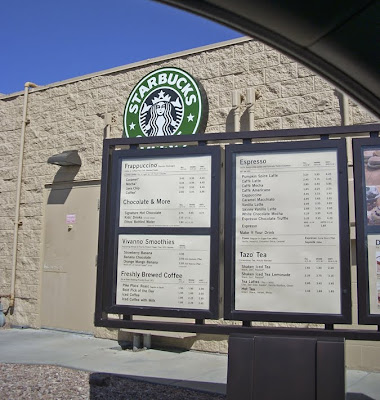 Of course, a good trail run requires some recovery fuel - I pass up the foo foo drinks and go hardcore - Iced Venti Americano, black please! Say what you want about $tarbuck$, you know what you will get when you go there for Java. Nothing irks me more than trying to go "local" and paying 3 bucks for folgers quality - blaaah! So much for my coffee snobbery, on to some stats: