Red Rocks and Falcons and Trails

Kathleen had to work Saturday, so she ran early before work and was able to get in a great 8 mile morning run.  I waited until she got home, had an iced mocha waiting for her recovery fuel, and then set out for my long run.  In anticipation that Kathleen was going to attempt Falcon on Sunday, I decided to run from home and incorporate some sort of loop in/around the Garden of the Gods. 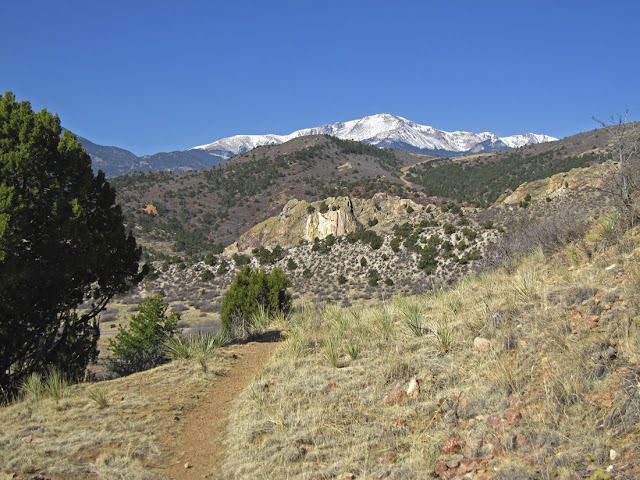 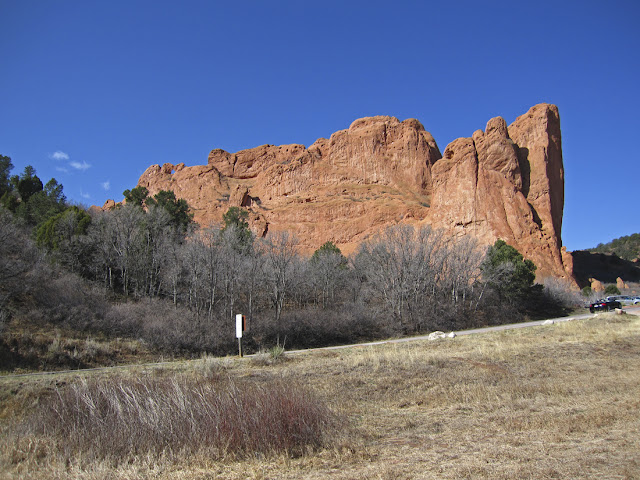 North Gateway and Tower of Babel
After completing the "urban" portion of the run, I dropped in on the Navigators side and onto the north Garden trails.  After a cool start, I had already ditched the arm warmers and the sun was fantastic.  I was trying not to think too hard about it - but it was NOT windy.  Big deal of late, for sure.  Although I encountered little to no traffic on the entrance trails, there seemed to be an oddly high amount of car traffic for 9 am - more on that later...  After looping up onto Palmer trail, I took the hard switchback up and started out of the Garden onto the National Forest trails.  I wanted to try another route this time, so instead of taking the goat path up and over the rim to Rampart Range Road, I circled south and around a few false summits, and then dropped onto a singletrack that appeared to head down to RRR.  The singletrack turned to a "halftrack" to a barely-there-track and before I knew it, I was scrambling down some 30% plus slopes trying not to plummet face first down the side of the hill!!!  Safely down, I dropped out onto RRR quite a bit below where I jumped on last time. 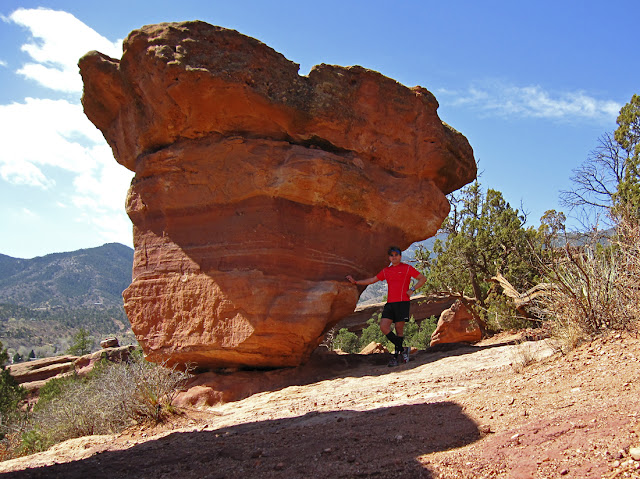 Making sure it didn't tip over... 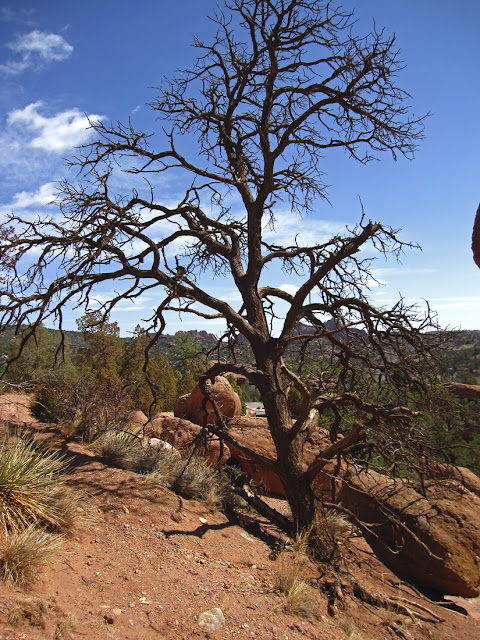 Almost off RRR - looking through an old tree to the Garden
After the cruise down RRR, I dropped back in on the Garden trails and headed up Cabin Canyon, then up the backside of Siamese Twins.  I kept thinking to myself, where are all these people coming from.  I mean. you NEVER see anyone on Cabin Canyon other than oddball trail runners people like us.  And having to pass people on the backside of Siamese - what??? 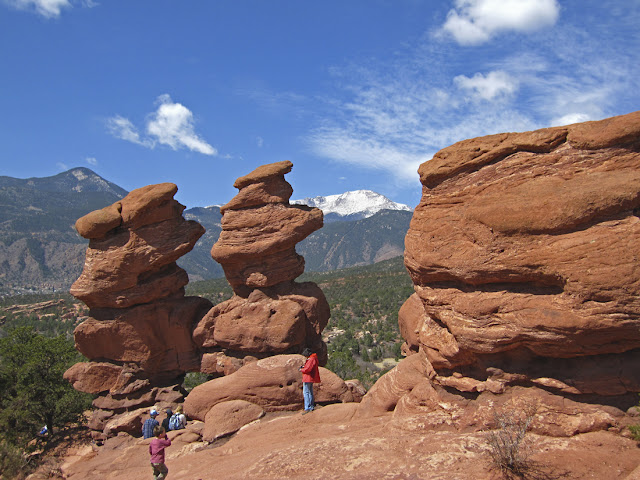 Siamese Twins
There was a horse train going through the normal route around Siamese Twins when I go to the top, so I had to come in the top side.  It then dawned on me that it was D-Day - the grossly overdone Earth Day extravaganza at the Garden.  Some of our worst trail experiences with rude, moronic people on trails have been on this very day.  Funny, as it is supposed to be a day for people who actually like being on trails... OK, where was I??  Oh yes, running along now... Climbing over, this was my view.  Aside from the little guy picking his nose, the other 4 people were lined up for the photo I wanted to take and they were not interested in moving any time soon.  Since I was 12 miles into a run, I got rather pushy, and popped in front to snag this photo, which you may have spotted yesterday: 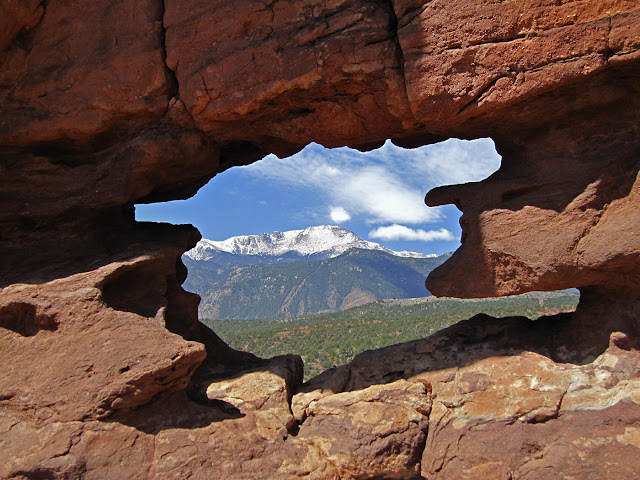 What a frame for Pikes Peak!
Although this is a ubiquitous photo around these parts, I still like to stop by every now and again to snag the shot.  I particularly enjoyed the lighting this time as the slightly shadowed keyhole allowed for a nice focus lock on the Peak.  It is also nice to see that prominent diagonal scar of the Manitou Incline - one of the better 35 minute workouts in our arsenal.... 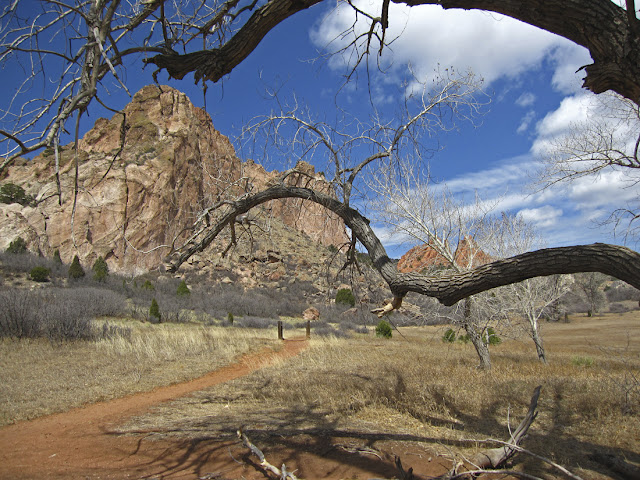 Reservoir Trail...and the tree is hiding something: 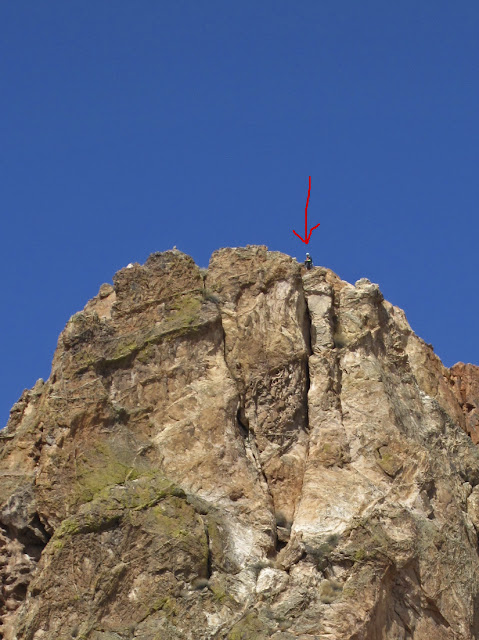 Climbers at the top of Cathedral Rock - I'll pass on that activity! 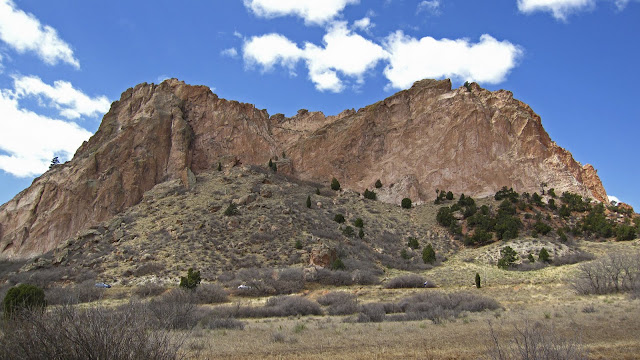 The whole enchilada - Cathedral Rock set against a wonderful sky!
I made the outer loop as quickly as my dwindling legs would allow, utilizing the most difficult trails in order to avoid the hoardes.  Made the quick jaunt out through the Navs and then up and over Flying W back to the casa.  Felt great all day and finished at just under 19 miles with 2900' climbing.  I am really starting to enjoy these longer runs - might just become habitual...  In fact, I may just start hauling off on some long runs like these and not even bother with races - we'll see.
Shoes - K Montrail Mountain Masochist
S - Pearl Izumi SyncroFuel XC
and once again, sported the McDavid Compression sleeves which take nice care of the calves!
More Sun and more Wind on the Falcon Trail 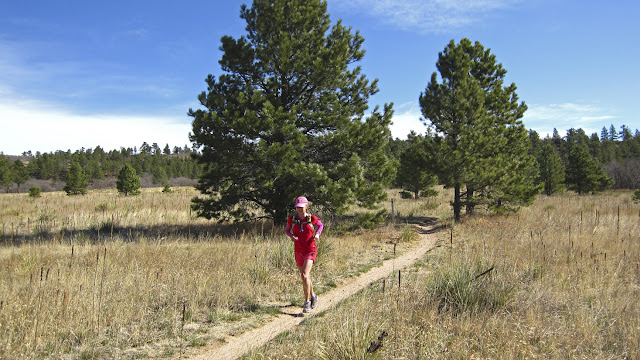 Kathleen enjoying the sunshine
Today we headed over to the US Air Force Academy to run the Falcon Trail.  Kathleen has been itching to see just how long she can run these days.  We know this trail well, so it is always a good testing ground.  The sun was out strong and we got out pretty early to "attempt" to beat the wind.  There were a bunch of people who had the same idea as the Stadium trailhead was packed with lots of empty bike racks on the backs of vehicles.  Despite the number of folks out, it really never seemed busy on the trail which was nice! 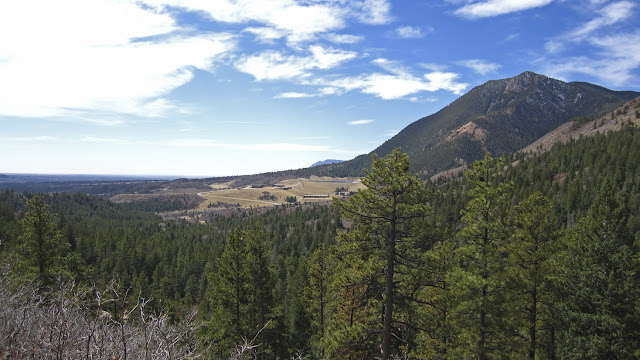 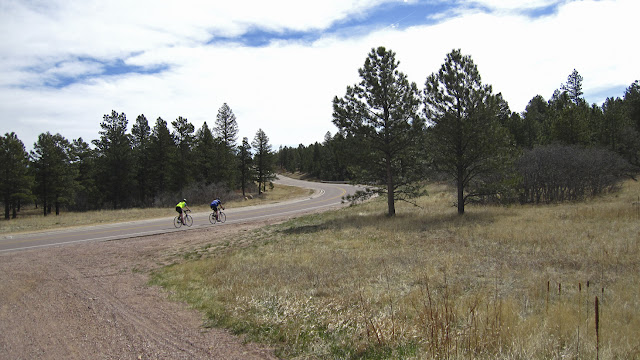 Lots of bikes out - trails and road alike
We couldn't help but notice the swarms of road bikes on the drive in.  It turns out that USA Cycling had a little shindig going on at the USAFA - The Front Range Cycling Classic. They were utilizing a loop that is one of our favorite road loops and was also the site for the 1986 Road Worlds. The AFA is an awesome place to ride and it is a  great loop. We usually do 2 for 30 miles.  The Pro men were treated to 5 laps - in 2000mph wind - OUCH! 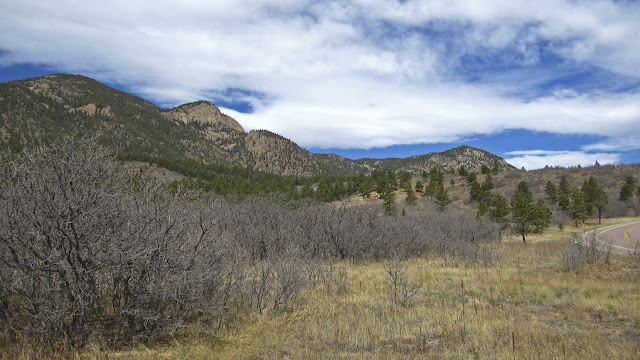 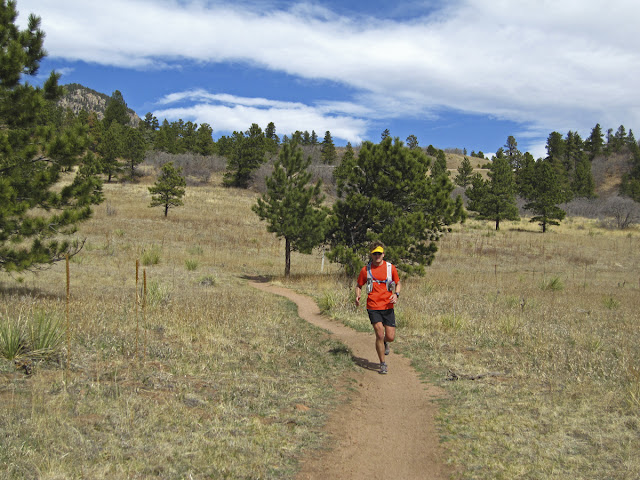 Sweet day on Falcon Trail
Even though the 2000 mph winds made their appearance yet again, the temperatures in the low 70's helped ease the sting of their rude interruption of our trail bliss!  It was an awesome day out there and as always, we enjoyed Falcon.  Bonus highlight of the day - We saw a couple on a SWEEET full suspension tandem clean the gnarly switchbacks down from the Chapel overlook - big time skills on that one!!!  Toward the end of the route, Kathleen simply ran out of gas, which is to be expected while we get her meds dialed in for Graves Disease.  This is OK - we knew it was a "test" run of sorts.  She stopped just past the 12 mile point and walked it in from there, which was fantastic.   It was a great day and we sat in the sun for a while enjoying fresh-baked-this-morning coconut oatmeal cookies and a protein shake, soaking up another wonderful day!!!
13 miles, 1800' climb
Shoes - Montrail Mountain Masochist
Scribed by HappyTrails at 10:08 PM 7 comments: