Trail with a View

After a quiet week with some rest for the legs, we had quite the social running weekend on tap.  Saturday morning, Kathleen went for a nice trail run at Ute Valley Park early before spending some time at work.  While she was running in Colorado Springs, I made the hour jaunt up to Morrison, in the foothills west of Denver, to meet Tim at Mt. Falcon Open Space.  It would be my first visit there and it is an(other) area with awesome views.  Lots of history surrounding Mt Falcon and early-1900's gazillionaire John Walker - read up on JeffCo's park page link if interested.  Below is the windshield view - heading for the hills. 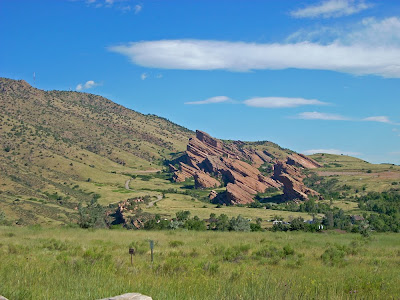 Just over the hogbacks that line C-470 to the west, the little town of Morrison sits nestled against the foothills.  Its most famous landmark by far is Red Rocks Amphitheater - a natural marvel and acoustic masterpiece.  When not in use for its commercial intentions, Red Rocks is also a hangout for workout junkies with surrounding trails and running the steps. 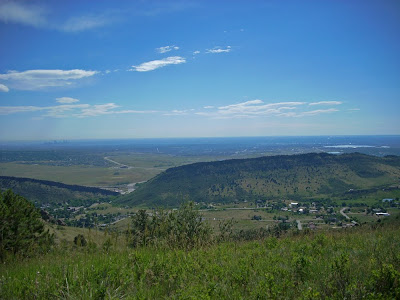 View across the hogback to Denver in the distance (far left, in the smog) 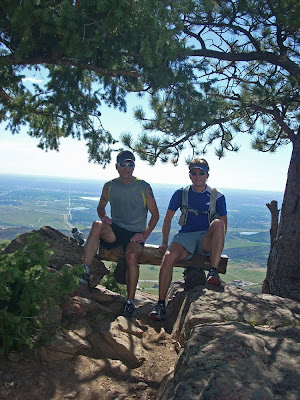 This trail system gets down to brass tacks right from the first step out of the parking lot - hope you did not eat a heavy breakfast!  From Castle trail we quickly diverted to the Turkey Trot, which is foot travel only - nice on the steeps because LOTS of mtn. bikes use this park.  The initial ramps had to be 10 - 15% easy, which means there was a good dose of power hiking mixed in with the running.  Add to that an intense eastern sun exposure and we were sweating buckets on the climb.  Eventually, Turkey Trot gets some shade and it was much needed as the grade just does not let up.  When we rejoined Castle trail at 1.7 miles, the grade eased for a bit until we hit another exposed and rocky section of steep climb.  As we climbed through some more forest, we eased out into a saddle and took the spur out on Walker's Dream trail - with the awesome overlook in the above photo.  This was the point where Walker had hoped to build a summer White House for the Presidents to utilize.  After his personal castle across the ridge to the west burned, the dream never materialized and the acreage is now a phenomenal open space park. 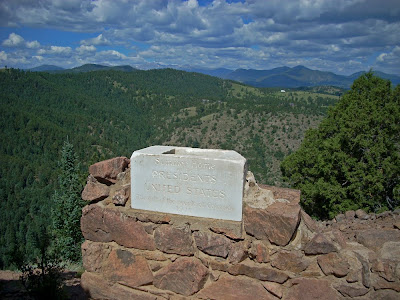 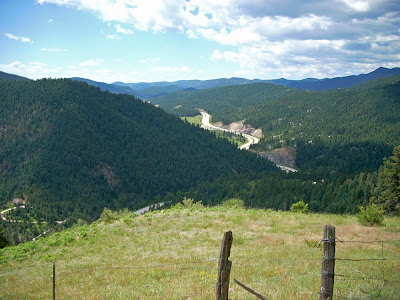 US-285 winds it's way into the mountains

The trail system is a lollipop with multiple loop options at the top.  We took the outer part of Castle to the Parmalee trail and dropped in for a wicked steep descent.  This was a nice gulch, with lots of shade, so we lost track of the descending a bit.  When we bottomed out, the drop was almost 600' vertical loss - guess what?  Climb back out.  So up we went - had some great southern vistas, including the photo above looking at the path through the foothills of US-285.  Tim will be driving this route next Saturday morning early to the start of the North Fork 50 mile trail race.  I hope to have a good debut as a pacer, jumping in with him at the 30.5 mile mark where the 50k runners peel off to the finish.  Back on track here, we jumped back on the Castle trail and started the trip down.  Like really, really down.  This was quite possibly the steepest continuous descent I have ever run and my feet and quads were barking after shedding 2000 feet in short order.  It was quite the workout and the views were spectacular.  11.25 miles, 3000'+ on the vertical gain.
Shoes - Asics Trabuco
>>>>>>>>>>>>>>>>>>>>>>>>>>>>>>>>>>
Sunday Social Day
We got up at first light Sunday in order to squeeze in a quick run.  It was great to be out early in the cooler air as we ran a good 5 miles on the neighborhood trails.  Kathleen was on schedule to see some folks finish the Summer Roundup Trail Race at Bear Creek Park.  Jill was coming down from Denver for the race and AJH was in town from Vermont and was doing the race as well.  Both did great and Kathleen was able to see them finish the race.  She also got to see our friend J set an age group course record which was awesome! 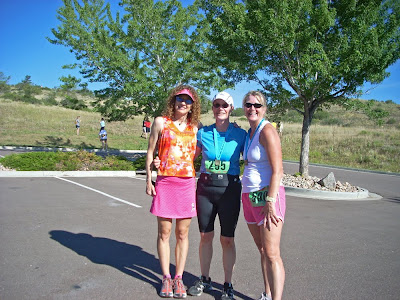 Smiling Gals on a sunny Sunday


While Kathleen was off to the race, I switched gear and headed out for a hill climb day on the road bike.  This was to pay homage of the first mountain-top stage in the Tour de France to the thin air atop Morzine-Avoriaz.  I was able to ride 23 miles with 2200' climb, nothing near what those guys rode up in the tour but good enough for a nice brick workout.  I then met up with the gals for brunch and we had a good time.  After brunch, Kathleen joined the brick club and went out for a nice road ride as well - quite a morning!  Happy Trails!
Scribed by HappyTrails at 3:26 PM 10 comments: