Wednesday, we signed up for the New Year's Day Rescue Run at Palmer Park (at the last minute!!!) and joined over 700 other runners for some fun to celebrate the arrival of 2009. The race is a benefit for El Paso County Search & Rescue and this was the 31st annual running of the event. The tagline for the race is "Rain, Snow, or 20 Below" - thankfully we had none of the above! It was sunny, cool, and windy but temps were mild for January. 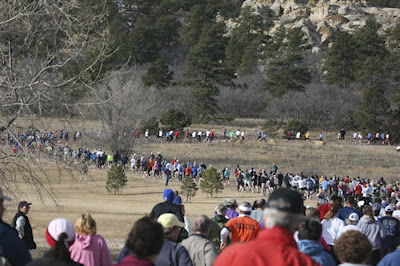 It took a while to get that many bodies in motion but here is the long train starting up the road toward the first hill into the park. Most of the race was on road, so it was a unique opportunity for us to test our legs off the dirt. The course was rolling, with a mile and a half climb on the road to start, then a nice diversion to some wide dirt paths. The 5k runners did not get to 'play' on the dirt, only the 10k course dabbled in off-road and that is what we were running! We are very familiar with the nice rolling terrain on the trails - it is part of our post-work run repertoire when the days are longer. After a couple miles off road, we were looping back around on the road for a steady, rolling climb out to the Grandview Overlook. From the turnaround point, it was back through the rollers to the main road and from there, downhill to the finish. I had a good vantage point to watch Kathleen duel it out with another gal for the last 2.5 miles. (and Yes, that means I was behind!) They went back and forth - Kathleen would pull ahead on the climbs and the other gal would pass and put time on her on the descents. Then, on the turn in to the flat finish area, Kathleen caught and passed her to finish 2 seconds ahead. It turns out that 2 seconds won her the age group (and 5th overall woman!!!) Pretty cool! And I was only 15 seconds or so back, so I don't feel too bad. Since we always run on dirt, we were pretty pleased with our foray onto pavement. 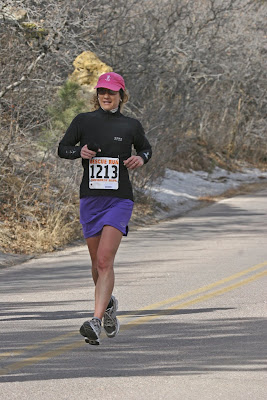 Luckily, there were photographers on course. Here is Kathleen on the final descent. 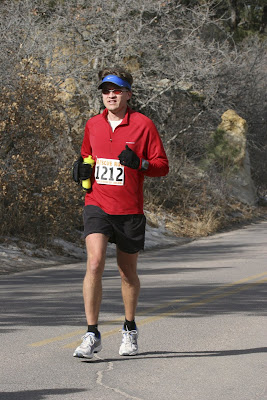 And Steve not far behind! 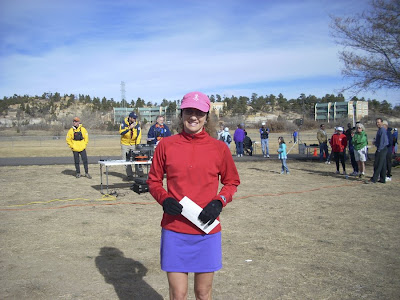 We had a great time at the race and were very glad we decided to try it out. We're putting together our 2009 wish list of events and now we already have one checked off! Great start to the New Year!!! Happy Trails and Happy 2009 to everyone.
Scribed by HappyTrails at 5:40 PM No comments: