Been getting in some good evening runs (and good morning runs for Kathleen!!).  Until this week, no Nathan pack on the evening runs, as most have been shortish and keeping the throttle down.  Not yet anywhere near the point where I feel the need to push hard on the weekend long runs, so the evening outings have been an attempt at getting some tempo workouts (so traveling light...)  Thursday night, however, we had unexpected sunny skies in the afternoon (and the first afternoon with no wind), so immediately after arriving home, I headed for Ute Valley Park with the camera on board.  Here are some pics of the trip: 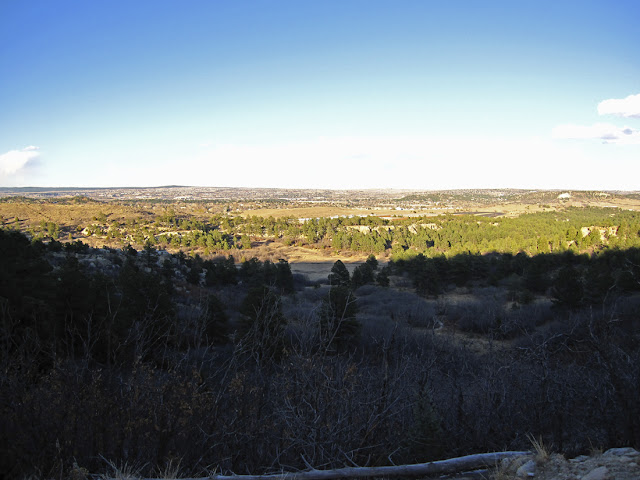 Typical evening run - shade to the west, sun to the east 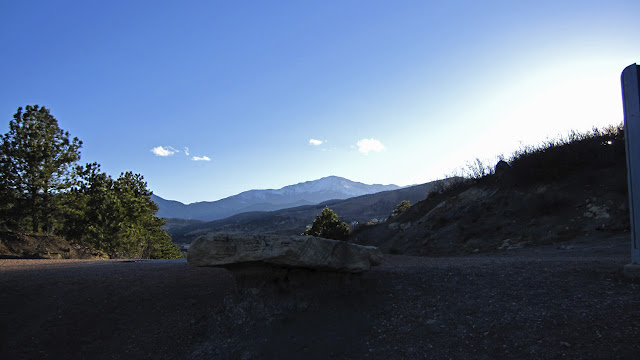 Catching good rays on Pikes Peak - not a bad view for an evening run... 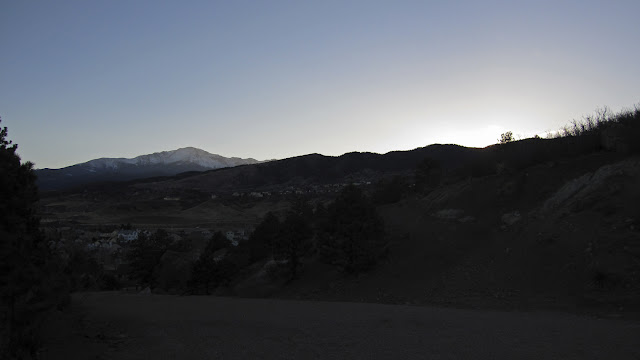 Back around for a second glimpse and fading daylight 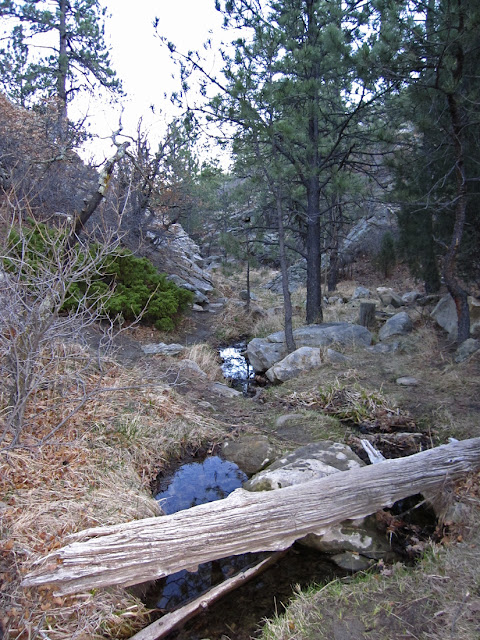 Nice textures along the trail in the low light of evening 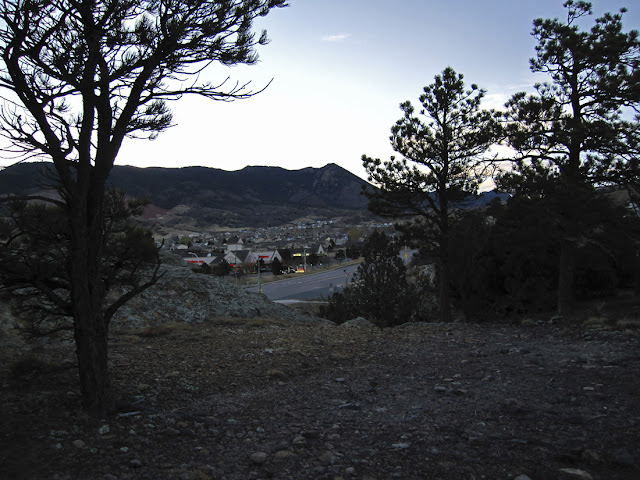 Rustic and suburban collide - heading out of the park for home
Both evening runs this week were over 7 miles, which will start helping with the endurance training.  (BTW, 3 runs in the mornings for Kathleen!)  I really pushed this one at Ute on Thursday, hitting very nice times for technical running and was hoping it would not backfire for the Saturday long run.  Good times!
Spruce Mountain ... and the WIND
Saturday, we headed up to Spruce Mountain Open Space for some good singletrack with a bit more mellow grades than the past couple weekend outings.  As has been the norm for longer than I want to remember, it was once again WINDY as all get out when we arrived.  You can only find so many sheltered areas to run good trails until you just have to suck it up and run in it.  So we glued a smile on the face and headed out on the trails. 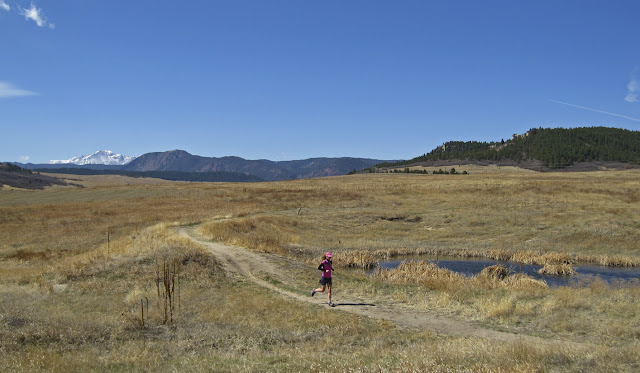 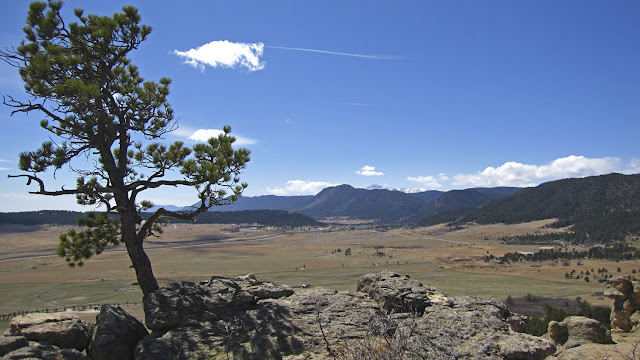 Nice view from the top of Spruce Mountain
The first portion of the run was on part of Spruce Meadows, which is quite exposed and therefore quite windy.  We looped back and headed up onto Spruce Mountain, enjoying some relative shelter on the climb and the first half of the loop on top.  It really was a pretty good day with sunny skies and low 60's temps.  The wind really dries you out, so water consumption was up quite a bit.  Rounding the south side of the mountain top loop, you hit Windy Point - and with the S to SW winds hitting 35+ mph, you can see the effect in this photo: 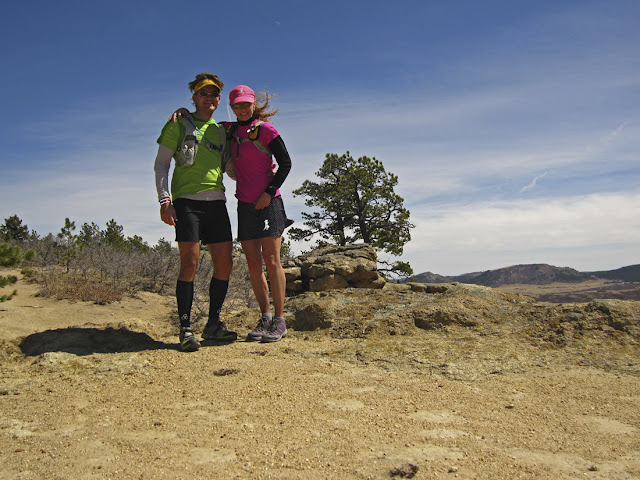 Gritting our teeth (and hanging on to our shirts!!) while being pelted with sand...
Finished out the loop on top and dropped back down the front side in shelter, enjoying the break from the relentless wind.  I ran into the trailhead and grabbed more water from the truck.  Kathleen finished here with 10.5 miles and quite a solid run for her!!!  It is really looking like she is on the comeback trail!  I had that short moment when I could have thrown the Nathan in the back and been done, but against my better judgment, I actually made the decision to head out for another loop.  As it turned out, I made a bit of a blunder in route arrangement by heading out on the Spruce Meadows big loop in the clockwise direction.  In hindsight, counter-clockwise would have given me about 50% less headwind, but that sort of thing happens.  The next 8.5 miles would prove to be one of those loops that fall under one of those nonsensical categories such as "character building", among other things.  For the most part it just sucked.  The rolling hills and plentiful sand on the Spruce Meadows loop, combined with the wind and subsequent sandblasting, made the end of the run more drudgery than I cared to enjoy.  Will it be one of those runs that I look back on when in a tough spot on a future long run and say, "Hey - I pulled through that one" ?  Not if I can erase it from my memory before then.... 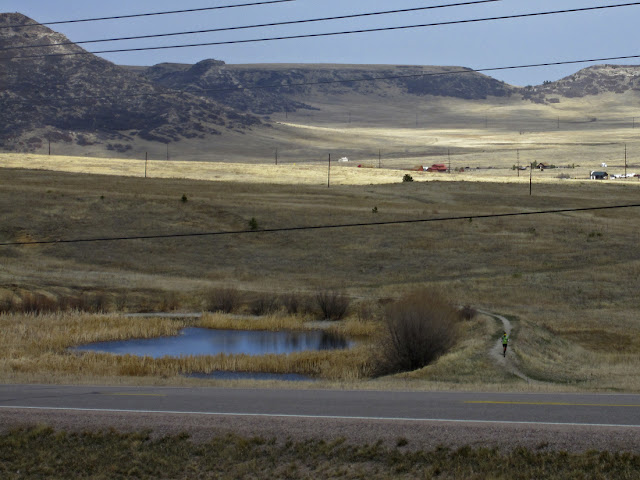 Long into my day - Kathleen got this pic of me from above at the trailhead
Got in 19 miles for the day.  Thought about calling it 23 for the sustained wind resistance, but it is what it is.  I do know that I will be back to this area for a couple more long runs as the "out there" exposure to the elements is quite similar to an area I may visit for a really long run in the near future.  No photos from today - sorry.  Went for a short recovery run in Ute Valley Park to get out of the wind...again.  25 degrees cooler today and 40 mph winds = no stopping for photos - just get'r done!!!  Have a great week and Happy Trails!
Shoes - Montrail Mountain Masochist
The numbers - 19 miles, 2240' elevation gain, 4 stops to clear sand from the shoes....
Scribed by HappyTrails at 6:28 PM 11 comments: