Fun in the Sun!

We have had at least a solid month of the most phenomenal weather (as if it is not always great...) and aside from needing some rain, we will take all of it we can get!  We had our hopes up to run Falcon Trail at the Air Force Academy Saturday morning to test out Kathleen's running progress, however, when we got there the trail was closed for a 24 Hour mountain bike race.  Plan B - we headed back home and ran at Ute Valley Park, which is always a good backup plan! 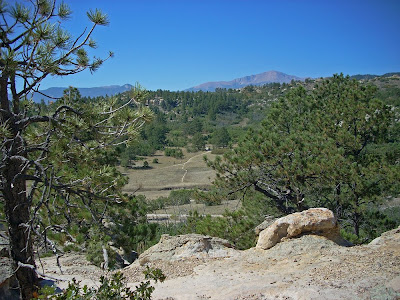 View across park to Pikes Peak 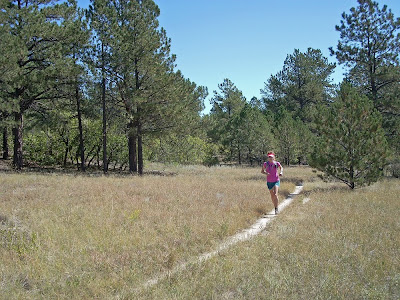 Kathleen running bottom of the valley
It was another splendid fall day along with summer like 80 degree temps.  We were able to get in about 9 miles at Ute and loop back to the house.  Kathleen decided to break off there and nurse her ailing legs in hopes of a shot at a longer run Sunday.  I headed across to the Foothills Trail and up for a short extra loop in Pike National Forest. 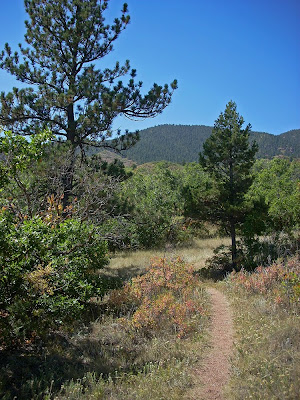 Starting to show some fall on Foothills 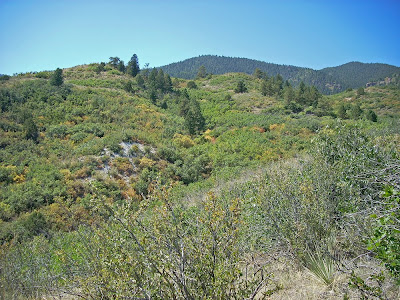 Next weekend, expect more orange and yellow..
Ended the day with 12 miles and both feeling really good.  We got a late start with the trail confusion, so we were a little sapped from the 80's at the finish of the run.  But fall is here, and we'll stockpile all the warmth we can!
Stats - 12 miles, 1600' elevation gain
Shoes - K Asics 2150 Trail
S - Asics Trabuco
Limbaugh Canyon Run on a Spectacular Day! 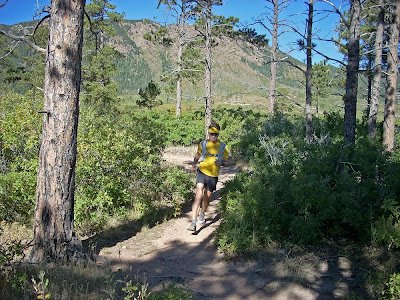 Trail 715 with Mt Herman in the background
We were hoping to get in a run today with a bit of fall color starting to show, and we hit the jackpot by heading to Monument to run the Limbaugh Canyon Loop that we first ran back in August.  We got out quite a bit earlier today, but it was already warming up.  Welcome back summer!  We ran a loop through the Fire Center and connected over to Trail 715, which is the backbone of the route.  Won't need a whole lot of description for the run as the photos pretty much tell the story.  If you want to see more after seeing the pics, you might be interested in this link. 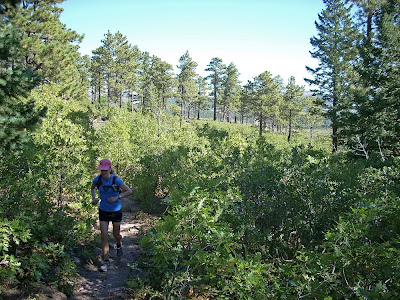 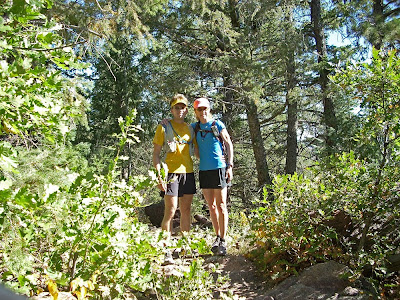 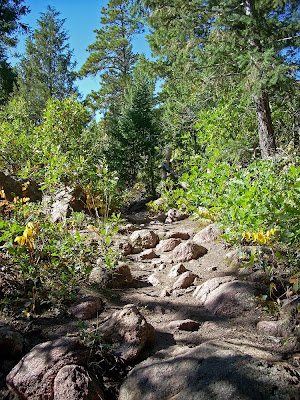 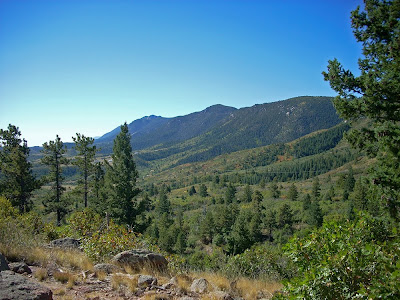 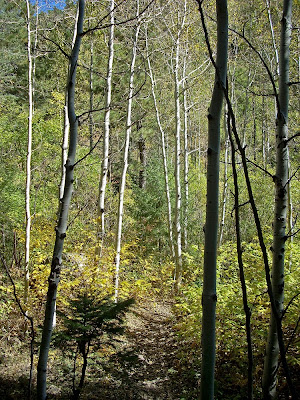 The trail heading up Bear Creek drainage
Since we knew all the turns for the route this time around, we were able to just concentrate on the trail and the beautiful mountain we were running around.  The above photo is about 1 mile below the Mt Herman road crossing and was our first taste of changing Aspens for the year.  There is something serene about their quaking leaves and the soft crunch of a leaf-blanketed trail that makes running in the fall endearing. 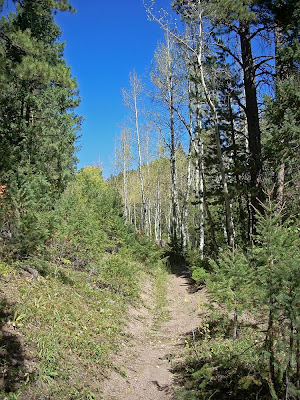 Opening from the forest to Mt Herman road 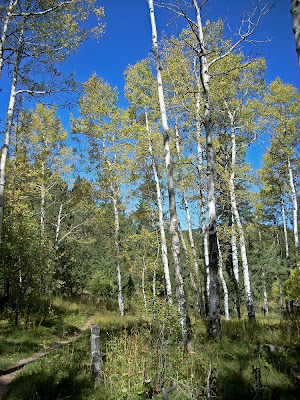 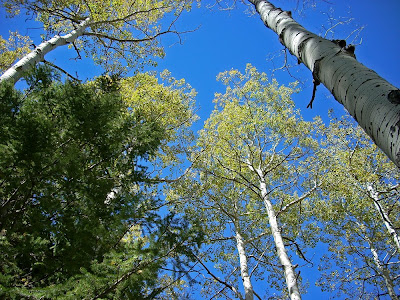 Wanna get away???
For those who live in the east and upper midwest, I know the plethora of colors you get in the fall - I grew up back there.  However, there is something about the dry mountain air, dizzying elevation, azure blue sky, and rich golden aspen trees that really make the fall here.  What it lacks in colorful variety, it makes up for in mountain grandeur!!! 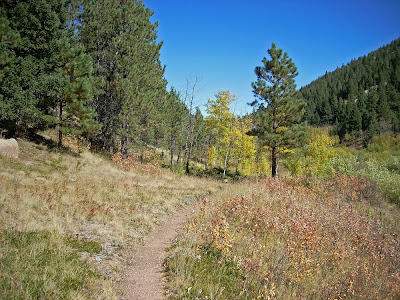 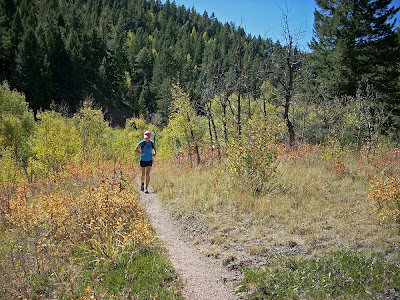 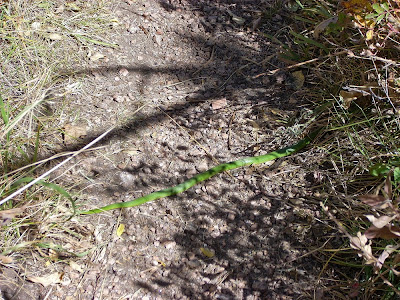 Wildlife encounter #1 - Smooth Green Snake
Not nearly the size or intimidation factor of a bull snake or rattlesnake, but this smooth green snake might be the most colorful snake we have seen.  He was almost moving too fast to get a good pic! 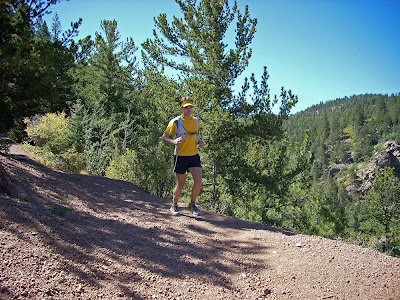 Coming out of Limbaugh Canyon... 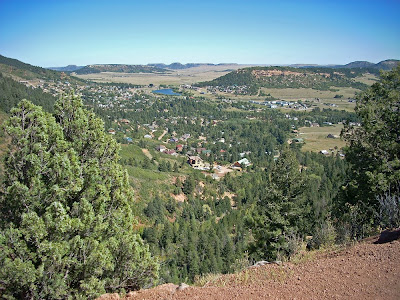 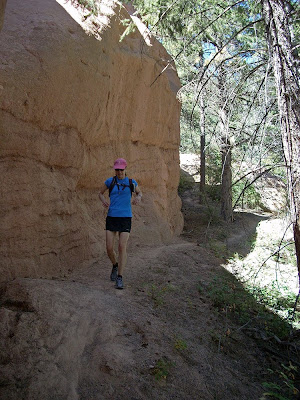 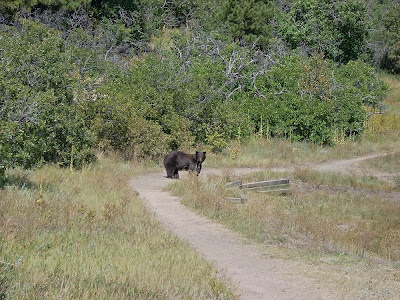 Wildlife Encounter #2 - Hello Yogi!
So we're finishing off a nice run, heading back down through the Fire Center and I round the trail nearing the pond to this sight.  After regaining consciousness (!!) I carefully extracted the camera and started taking pics.  As soon as he (how can you tell?) saw that I was not going to continue toward him, he just sat down in the trail and watched me.  This is ~ 100 feet away. 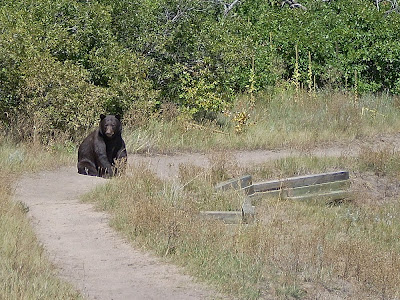 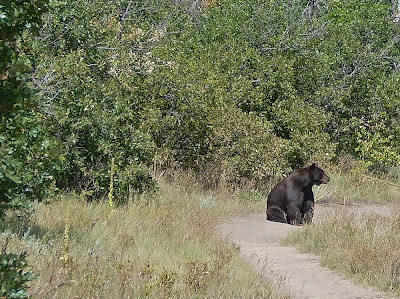 Finally distracted by some horses
So we have seen bears before on the run, but never one this large.  This was a very large, very magnificent animal.  He seemed very mellow, and honestly, I think he just wanted a dip in the pond.  It was already in the mid 80's by now and that is ONE.HEAVY.COAT he has on!  Pretty cool to see animals like this close up.  He took off into the brush shortly after this photo as a group of 5 horse riders approached.
We had a great 14 mile run - this is really just an all around awesome loop, especially with the fall color and wildlife excitement!  Hope everyone has a great week and let us know if you would like to try this one out - we'll be glad to go along!  Happy Trails...
Stats - 14 miles, 2700' elevation gain
Shoes - K Asics Trabuco
S Pearl Izumi SyncroSeek XC
Scribed by HappyTrails at 8:10 PM 25 comments: