For scheduling reasons, we had to get moving early this morning - well at least by 7:15. When the mercury is sitting at 39 degrees, that is early enough. We needed to be time efficient, so we took off from the front door and ran a loop on the trails in Ute Valley Park. Must have been a schedule sort of day because we saw several other runners and hikers out early for a crisp, foggy morning. We ended up having a great run, though, logging about 6 miles of trail and feeling pretty strong after some good runs on our week off. We're trying out a new plan for the cold season - go as long as possible with light clothing until forced to break out the "winter" gear. We'll see how it goes - you always feel better (and run better) when not mummified by multiple layers of clothing. 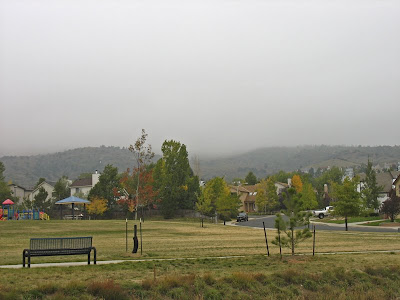 After Kathleen took off, Steve went with Sage to the local park to get her a little exercise. Australian Shepherds do not do well when they have to stay inside all day! 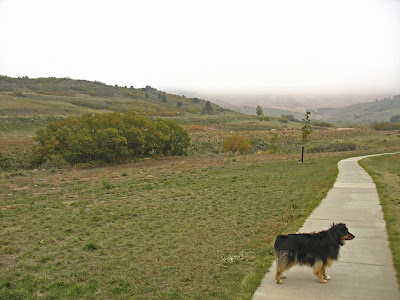 Sage actually enjoys this time of year much more than her parents, especially with the heavy fur coat she wears. She looks darn good for getting ready to celebrate her 11th birthday! As you can see behind her, there were no mountain vistas to be had today. The weather is calling for more of the same tomorrow, not good since we need a long run. 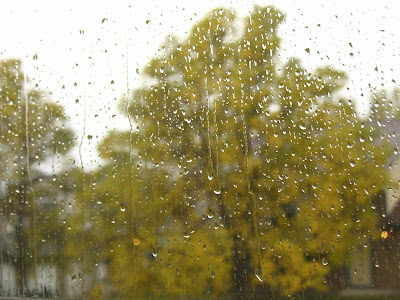 Our walk was cut short by the rain man - we made it home a little damp and then the rain really started. One of those gray days... 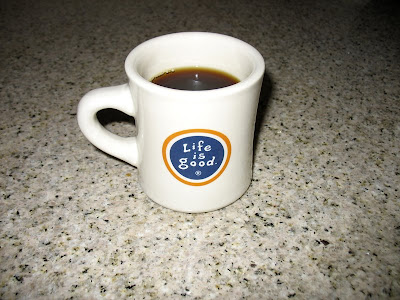 So I was forced to put on a pot of coffee rather than rake leaves and mow the lawn - bummer!!! In case you were wondering, I am a coffee freak. Kathleen does not like hot drinks, so she has been more of an iced tea person. However, I recently got her hooked on Iced Mochas (key=chocolate), so my espresso maker has been doing extra duty. Back to the Joe - today I brewed some Organic Blacklightning from Aroma Coffee of Santa Fe that I picked up while in New Mexico. It is quite a nice coffee, smooth and dark which is my preference. Contrary to what you might think, the dark roasts are not necessarily the strongest in terms of caffeine. What I like about the dark roasts that I generally buy is that they are not as bitter and don't leave the after taste of some of the brighter roasts. If you are a coffee junkie also, I would highly suggest trying out some beans from Rocky Mountain Roastery in Fraser, CO. I have three all time favorites there - Italian Roast, Organic French Roast, and Team Totally Wired. RMR is a small batch roaster and often times when you order beans, they were roasted the same day or the previous day and come to you nice and fresh! Plus, they are coming straight from one of our favorite trail areas on the planet so every cup evokes memories of sweet singletrack.

Here's hoping that tomorrow brings a long run and some trail photos.