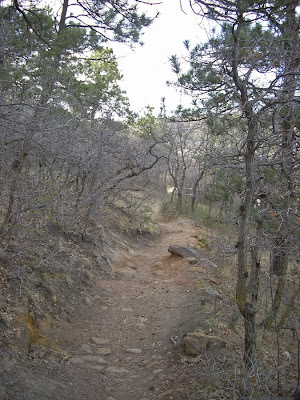 I hit the trails at Palmer Park again Wednesday night after work and what beautiful trails they are! Don't know how scientific their poll is, but over at Serious Running's Best Trails in Colorado these are currently #1. It was a nice day with the temp at about 63 when I left work - perfect evening run weather. I don't know what to expect as I get some last runs in before Greenland 25k - don't even know if you really "taper" for an event like that. So my theory was to continue getting some good intensity in and maybe not run quite the volume this weekend. I have never had to think about tapering, so if I screw up, it's no big deal - I will still set my 25 k PR ;-) 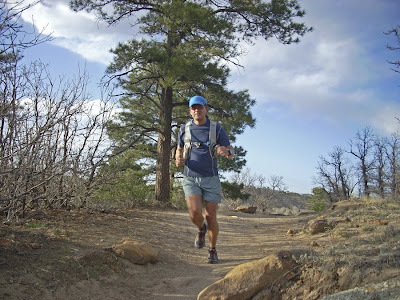 I ventured out on some of the lower trails to start since we are eaking out a bit more daylight. Here I'm cruising the Palmer Point trail heading out to the northern reaches of the park. It was another traffic jam on the trails as folks are shedding the couch for some time out in the "wild"! 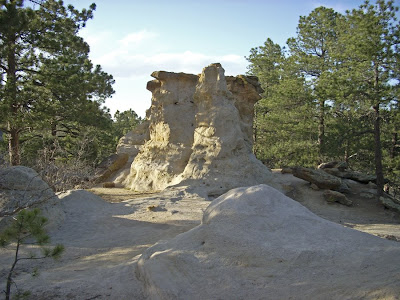 You could say this is a natural "cairn" - quite difficult to miss! 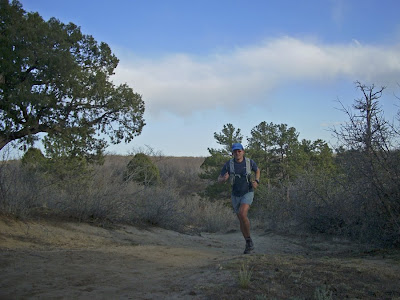 I made my way around the outer edge of the park and started the climb up onto the mesa where I could harness the last of the evening rays. I ran a few meters on the Yucca trail with none other than Wiley Coyote right after this picture was snapped. I think I ticked a few hours off his "life-clock" and he crashed through the gamble oaks trying to get out of sight. It was a bit odd seeing him on the mesa as I was right in the middle of the dog walk area - hold on to your poodles folks! 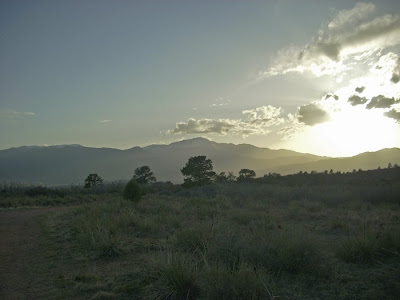 I have been getting to watch some incredible sunsets from Grandview mesa and this was no exception. I was able to click off almost 8 miles with 1100' climb, so it was a nice evening workout.

Saturday Slog
I decided to do on last recon run at Greenland Open Space today and it was less than optimal conditions. This was the view from the entry to the park, so the camera was left in the truck after this shot. 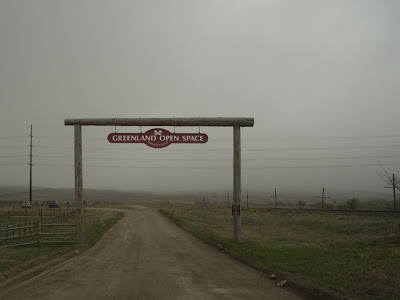 I was hoping to test what kind of speed I could push on the main loop but the weather was iffy at best, so I was not sure what would happen. As I arrived, I had another surprise - there was a horse event taking place on the trails, so I would be sharing track with half-ton turd spewing machines - fantastic! One of the horse people did have a cool little device that measured wind speed - 27 to 32 mph straight from the south. That meant the first 3.5 to 4 miles I could look forward to plowing headlong into the wind and light rain - AWESOME! No land speed record today - the CR would be safe for yet another day ;-)

I did not drive 35 minutes to turn around and head home, so I hit the Garmin start and took off. The first half of the run I was basically in and out of having numb quads from the blistering wet wind, so it was difficult to really get a rhythm. (Yes, I forgot to bring tights and it was a wet 38 and who knows what the wind chill was!) Once on the climb on Kipps Loop, I started to warm a bit and really got into a nice cadence. I am hoping to outdo some of the "roadies" on this climb next week - we'll see.

The climb went well and after 1.3 miles of steady ascent, it was time for the payoff - 3.5 miles of rollers and shedding about 500 feet of elevation with a solid tailwind - oh yeah! I finished feeling a lot better than I did for the first 30 minutes or so and held a respectable speed for the conditions. You never know, if it sucks on race day, I'll be better prepared :-) Happy Trails - let's just hope they are dry tomorrow!!!

Oh yeah, been neglecting the shoes - Asics Gel Trabuco - haven't run in anything else for 6 weeks
(w/ some nice new Icebreaker Merino Wool socks that are dang comfy)
Scribed by HappyTrails at 4:01 PM 1 comment: