Putting in the Work

Feeling like we needed some good, hard work today, we headed down to Cheyenne Mountain State Park.  Since it was not supposed to creep out of the 30's much before afternoon, we knew we could get in some decent mileage there without much threat for the mud bog to form.  Add to that the fact that the sun never really crept from behind the cloud filter and we were able to nearly finish our run before encountering any substantial mud. 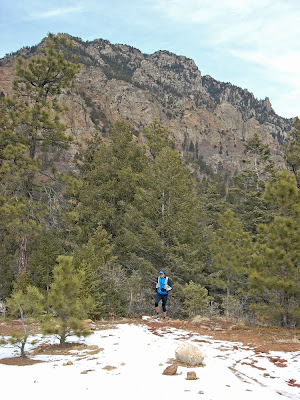 Since our access to anything nearing "mountainous" has been limited aside from running continuous snowpack/ice, we wanted an opportunity to test the mid-winter fitness on a tough track.  CMSP fits the bill for that, and was continuously runnable with the snow/ice sections short and manageable.  With our chosen start to the route, we were treated to a bit more than 4 miles of fairly constant climb.  It has been a while since we've had sustained climbing of that length, so it was good to knock a little carbon off the climbing cylinders and run the RPM's pretty high by the time we topped out on North Talon.  The mountain was looming large as I round the corner at the summit and let out a little "woohoo!" for the arduous climb. 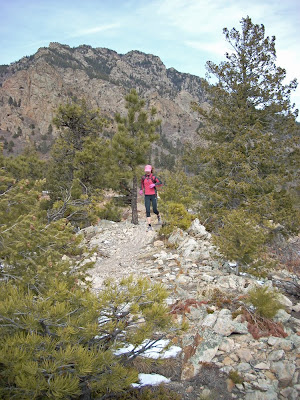 Kathleen drops off the North Talon summit and slaloms through the pines, choosing her footing wisely on the rocky slope.  This is another great thing at CMSP - with a mix of technical and smooth trails, you can never go to sleep on the footing - part of what makes trail running so engaging. 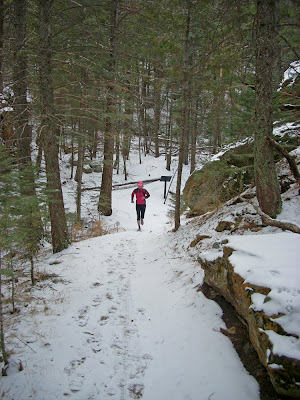 A little darker (and quite cool) in the forest where North and South Talon intersect.  Even looks chilly! 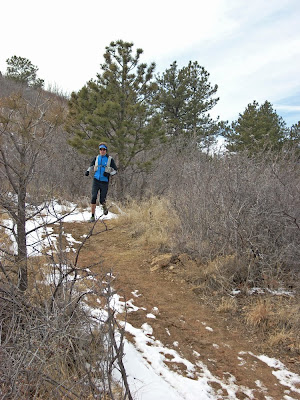 Nearing the bottom of the long descent off of the Talons and heading out on Sundance.  We wanted to get off Sundance early as the lower trails were sure to soften too much as the temp was creeping into the upper 30's.  So we looped around Zook to Blackmer and headed up high again for the other top loop.  While we picked up some clay on the south side of Blackmer, we reached the intersection with Cougar's Shadow in good shape and, being the second highest trail in the park, this trail was still pretty firm from a cold night. 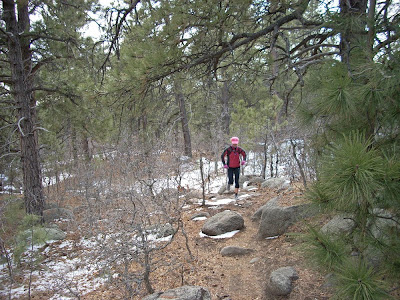 We really enjoy picking our way through the boulders on Cougar's Shadow.  While this is no place to set a PR for a given mileage, the effort and concentration required are immensely constructive for a trail runner's skill building.  It is also great strength building for well rounded legs and core - an all-inclusive workout.  Who needs a gym, right? 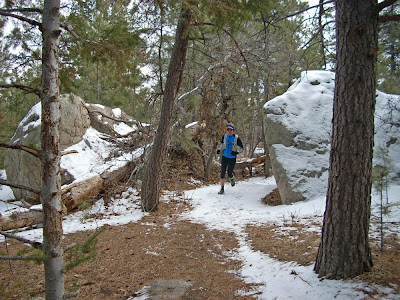 Running through a couple huge boulders on Cougar's Shadow. 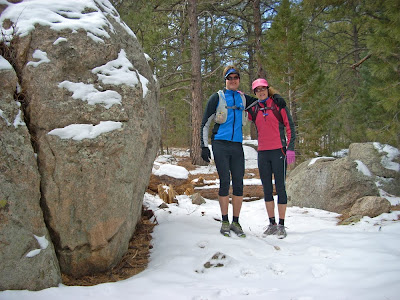 Stop for a group mug shot - I almost had my feet slide out from under me!! 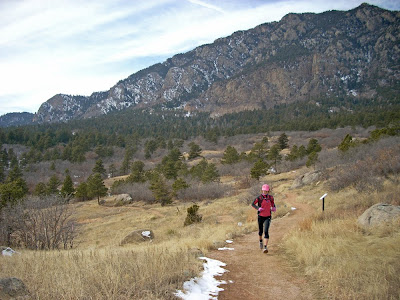 Kathleen heads off of Blackmer, headed out onto Raccoon Ridge.  We were starting to tire a bit, but figured we would catch the lower north loop of Raccoon/Soaring Kestrel/Coyote Run before dropping out at the trailhead.  These longer runs on the weekend are helping us gauge our winter fitness, while keeping a strong base for some good spring buildup. 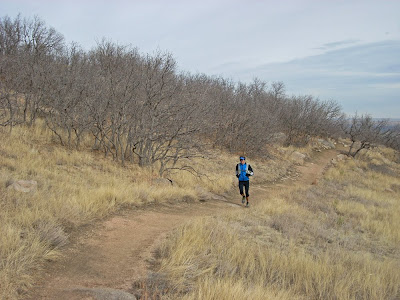 Finishing up the run and heading down Coyote Run after a satisfying day out on the trails. We never take for granted how much we have available in our area and the great variety of trails at our disposal. We are very fortunate to live in a part of the country where trails and wide open spaces are still treasured and made available for recreational use. With a bit over 14 miles and just shy of 3000' climb, this was a great run for any time of year but especially nice to squeeze in during the middle of winter!


In other news, depending on a possible prior engagement in July, Steve might be challenged to attempt a 50k at the inaugural North Fork 50/50 in and around the Buffalo Creek recreation area. We have mountain biked there for years and were able to get in a couple long runs there last year. We have always thought it to be a fantastic site for an ultra - now it is. Could change my mind but it is alluring...
Scribed by HappyTrails at 9:30 PM 9 comments: