After a 9 month furlough to the golden gate state, our friend Tim bid farewell to San Rafael and moved back to the Promised Land.  We were glad he decided to move back and hit him up for a run this weekend.  (Of course, everyone else up in Boulder was doing the same, so hopefully this week calms down for him!!)  So we decided we would go over to the Air Force Academy and run the Falcon Trail and follow it up with some good Mexican food - sound good???? 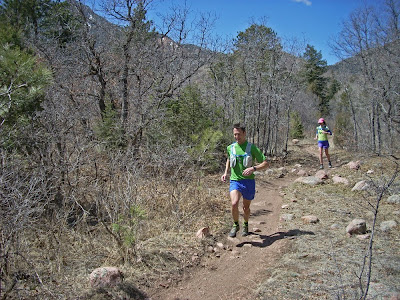 Tim and Kathleen cruising the Falcon Trail
We headed out on Falcon counterclockwise and took a nice pace so that we could chat and catch up on Tim's jet-setting, Cali-tales and mostly running related yack.  (Oh - and also Pippit, Tim's awesomely cool little dog that goes everywhere with him!)  It turned out to be a perfect day with sunny skies and temps eventually climbing to 60 degrees.  That was fantastic after yesterday's gale force winds and downright cold temps for the morning run.  As you will soon see, it appears that we all run for team lime green!!! Too weird that everyone ended up in the same color shirts...Tim and I even had the same Wildcats on - lime green also!!! 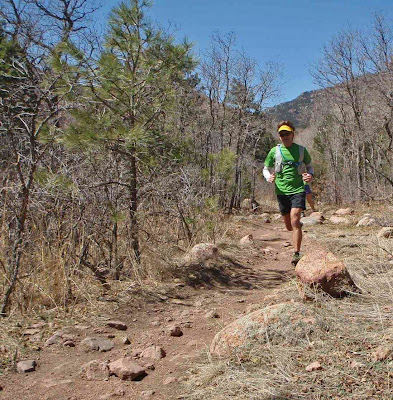 Steve coming through (photo by TL)


We had a blast running the trails at AFA and Tim gave us a bunch of tips for the running/action photos, as he is an experienced outdoor clothing model and veteran of some magazine photo shoots.  Fortunately, the fellas up in Boulder softened up Tim's legs for us, so he was comfortable cruising the Happy Trails pace.  He has to save his legs for the Miwok 100k coming up in a few weeks.  Plus - he was noticing all the ladies out on the trail today and trying to make a good showing - never know when the future Mrs Footfeathers is on the trail!!! 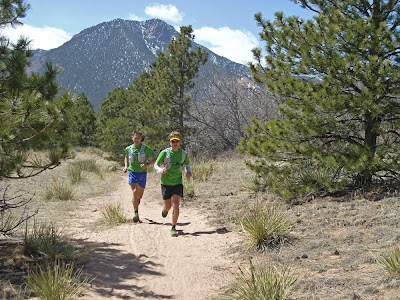 Steve leading the way for Tim. 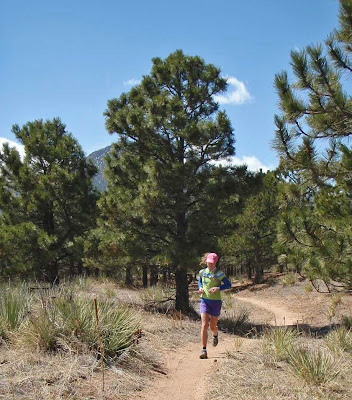 Kathleen strolling through the pines.  (Photo by TL) 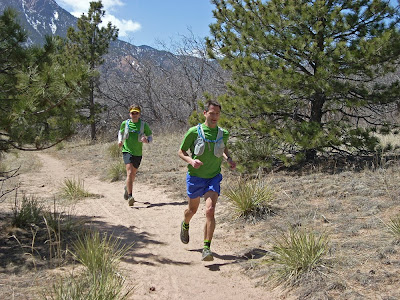 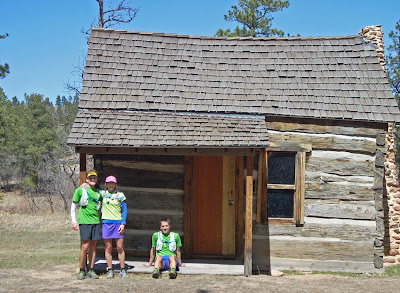 
Had to stop for a group photo at the old cabin from the 1800's.  It is seriously leaning to one side and we were wondering if we would have to lean over at an angle to make the picture look good!!  You can't tell from the photo, but it was 1.5 miles to go and we were all thinking BURRITO!  We polished off a great 13 mile run, enjoying good company and a friend who was willing to drive 80 miles to run with us.  well, and eat Mexican food too - can't forget that.  We had a nice visit at 3 Margaritas Mexican restaurant in Monument and rehashed a great day running.  How wild is this - we ran into a guy in the parking lot that has read our blog and recognized us - Thanks Luis, you helped make our day!!!  We chatted a bit about Buffalo Creek trails - I might still have to kick around the idea of hitting the 50K there ... Hmmmm - not sure if I can safely train up to that mileage in 3 months, but alluring as the trails are awesome.  Maybe if some others joined the fun (TZ & Dana, Tim, anyone ....)
Shoes - K Asics 2150 Trail
S (&T) LaSportiva Wildcat 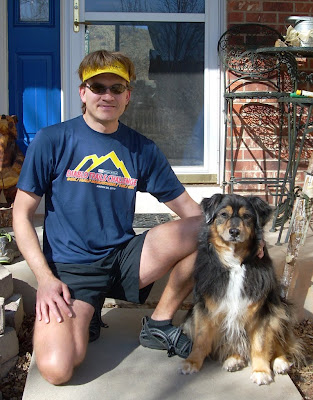 Sporting my new Diablo Trail race shirt that Tim smuggled in from Cali - Thanks TL!!
Scribed by HappyTrails at 7:54 PM 18 comments: