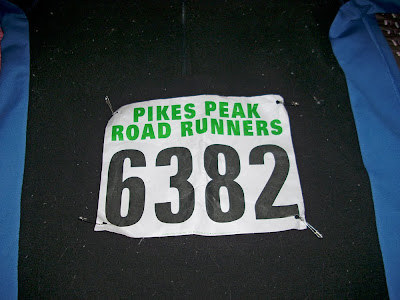 After a couple weeks of feeling a little blah on runs, I decided to hop in at the last minute to the Pikes Peak Road Runners Winter Series III race.  Kathleen had to work, so it was just me heading north on I-25 for this event.  The Winter Series is a progressive short/long series where each gets longer for both.  So yesterday's race was a 5 mi / 10 mi and I jumped in on the 10 miler.  Most of the series is on dirt or at least dirt roads, and this race was on the Santa Fe Trail between Monument and Palmer Lake Colorado.  The PPRR nickname for this race is the Wind Tunnel - great.  This trail is very open, and sure enough we had wind.   This is also long, flat (for Colorado), and pretty straight - a course for the Gazelles, not necessarily for a trail runner.  But I figured running with the speed demons every once and a while might help my overall leg speed, so why not?  It's not like I do many races so a little winter fitness test won't hurt anyone.  So I joined up with 533 other runners to hit the trail.

The sun was luring all the runners in the hour before race time.  Here is the view as I was walking to the staging area.  All of these races have walk-up race day registration available for last minute schlubs (like me) to hop in!  It was sunny with only a slight breeze when I arrived but that would change.  I also got to meet Ace, fellow Colorado blogger, for the first time before the race, which was very cool. 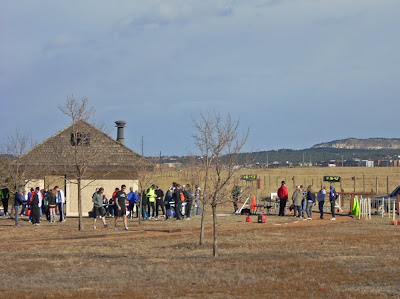 The staging area was at the Baptist Road Trailhead on the Santa Fe Trail at about 6800'.  This is about an 8 foot wide multi-use trail that is dirt with crushed granite surface.  The race headed north to the 5 mile turn around at approximately 7200'.  With all the rollers, the Garmin calculated 834' accumulated climb - pretty flat for 10 miles of Colorado running.  Except for the last mile, there was no snow on the trail due to our non-snowy season so far.  Reports are that in past years, the northern end of the long course involved post-holing shin deep snow.  SO sorry I missed out....
So, as for the race, obviously I had not planned specifically for it, so when I decided to have at it, my goal was pretty simple - top my fastest 10 mile race time, not blow up, and hopefully not cramp (which has been a nemesis of almost every race I have run or biked.)  I ran out of S-Caps! so I was a wee bit nervous on the cramp part.  So in the hour before race time i sipped on some NUUN and it seemed to help.  I had brief thoughts of hanging with the aforementioned gazelles but that evaporated quickly after exiting the start corral.
First Half:  As mentioned, the weather changed.  We got a stiff, cold wind from the northeast and clouds rolled in right before the start.  So I had to start somewhat sensible as we were climbing and fighting the wind for the out portion.  I felt pretty good and generally ran pretty smoothly in the 7:40 - 8 pace range on the way out.  I was glad I wore my Sporthill 3SP jersey - no wind coming through that puppy!  I found some folks who were in my capability range and tried to watch my pace.  I tend to get brain freeze on these straight/flat type runs - before you know it you are lulled into a slower pace but you perceive your effort as being the same.  At least for me it works that way.  Last mile on the out, hit some chunky packed snow sections, which blew up the pacing a bit as everyone was jockeying for the "good" line.  Hit the turn (5.05 mi) at 39:49 / 7:53 pace - Crap, I got some work to do!
Second Half:  Ah, the tailwind - every runner/cyclist's dream on the Santa Fe trail is that the festering wind in your face when heading north will not switch directions when you head back to the south (trust me it happens).  Jackpot - we got the tailwind.  So descent + tailwind = sort of happy.  I started to calculate pace/time/speed/wind shear/leg explosion combinations in my head as to what it would take to hit my goal.  My "secret" goal was to finish in the 1:15:xx area.  Had some work cut out for that.  Plus my pace buddies on the way out were really notching it down when we hit the turn.  I started to talk to myself a bit - telling myself this could take some time in the "hurt locker" to get it done.  Or the "pain cave" - whichever works for you.  Kept the second half sub-7:20's which is pretty speedy for me at this point.  The last couple miles were not fun.  First, it spit a few snow flurries - that was just an insult, but I tried to ignore it.  But I hit low 7's, high 6's for some brief periods and that was all the gas I had.  Stopped the clock at 1:15:53 - new 10 mile PR by 5:50, so that was pretty solid.  10.11 miles on the Garmin, which put me at 7:30 pace overall and I feel satisfied with that.  UPDATE: Forgot to look at the official results, but here are the numbers: 38th overall, 35th male, 6th in 40-44 age group.  For those who like to geek on the numbers, here they are: 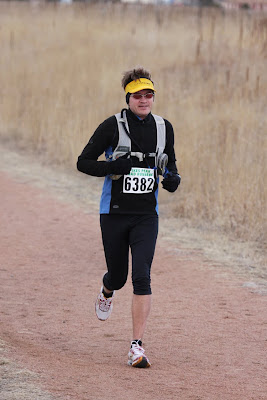 (Photo courtesy Tom Dewane)
This just in - an action shot!  (And probably the only dork with a hydration pack.) 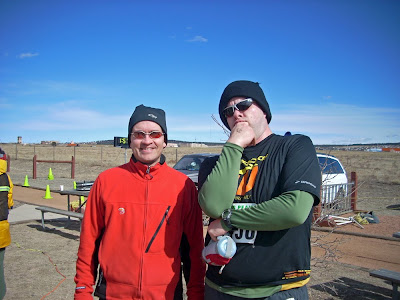 Steve and Ace - chillin' at the finish! 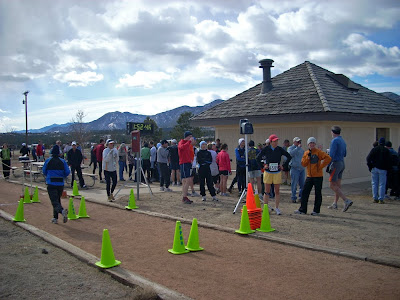 What, did someone say donuts?  Nothing like Hostess Chocolate donuts and coffee at the finish - mmmm.  I ran over to the truck and quickly got the sweaty clothing swapped out for Windstopper and a warm hat and hung out at the finish area for a while to watch some people come in.   It was a good race, probably not totally my style or speed, but that's OK.  Even got a photo with Ace at the finish, but forgot to get a Happy Trails waiver so I will post it later if he doesn't mind.  I'll also post a pic of me in the race when they come up on PPRR's website. 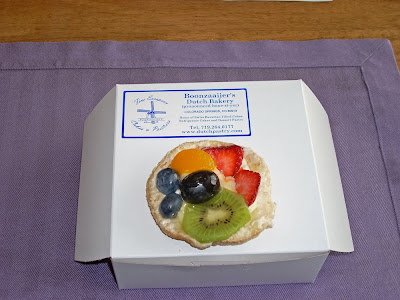 Post-race fueling - My sweetie brought this home to me from our favorite bakery - Boonzaaijer's Dutch Bakery.  A delicious fruit tart - yummy.  While I don't photograph food as well as Tina, you get the "picture".  Happy Trails everyone!

Shoes - Brooks Ravenna
Scribed by HappyTrails at 11:25 AM 13 comments: