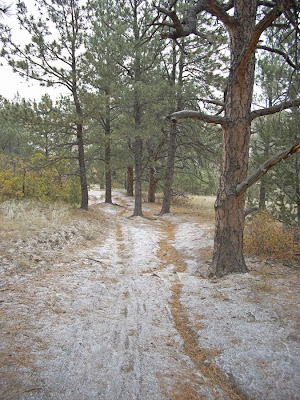 To say that we're not ready for that on October 10 is quite an understatement. Got up early because Kathleen had to work, and went right back to bed ~ 16 with 8 wind chill. I thought I would wait it out and the temps might sniff the wonderful 35 forecast for the high today. Not a chance - weather dude blew it again. My mileage has been short with the early nightfall now, so I sucked it up at about noon and headed out in the above noted weather conditions. Believe it or not, it was slicker than snot on the trails. We had freezing "rain" that turned to snow, so it was snow over previously wet. 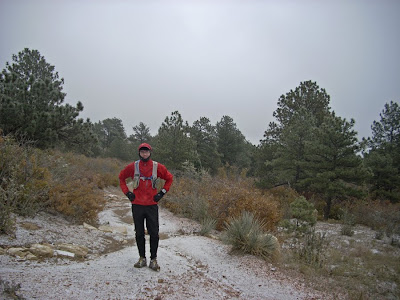 This is the part that's wrong: Tights, lightweight shell over winter jersey, thin balaclava because the skin is not acclimatized yet, and winter gloves. Sweat a little on the climbs, freeze it off on the descent. Can I find the rewind button? Summer reruns airing somewhere? Please? 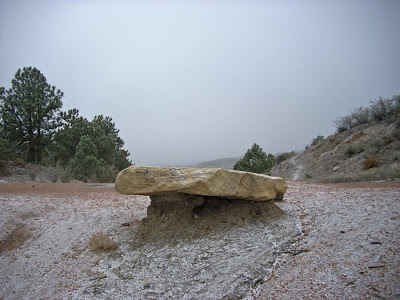 My recent series of photos from this rock has culminated in this - Pikes Peak was hijacked and is nowhere to be found. It was replaced by a vague, gray sky that spits chunks of white ice crystals at you while you run. I ended up running 7 miles - could.not.take.more. Weather dude is claiming we'll hit 52 with sun tomorrow for a long run. If not, I'll be on the news for other reasons ....