Palmer Park Run (What a Difference a Week Makes...)

Previously...
So back up a week and gather some background on why there was no posting here.  It was butt cold.  I was too frozen to type.  Last Saturday, I had quite possibly the coldest experience ever on a run.  I finished with the wool undershirt I was wearing frozen (as in sheet of ice) from my chest to my waist.  Hands frozen too.  Almost called a cab to get home.  Thought about changing the blog to Unhappy Trails.  Sunday was not much better, so we headed over to Ute Valley Park hoping to avoid the bone chilling wind.  We had some snow, but for the most part have missed out on what the Northern Regions received (Denver, Boulder, Ft Collins).  So with the mercury at 20 and wind chill temporarily above 10, we headed over to Ute. 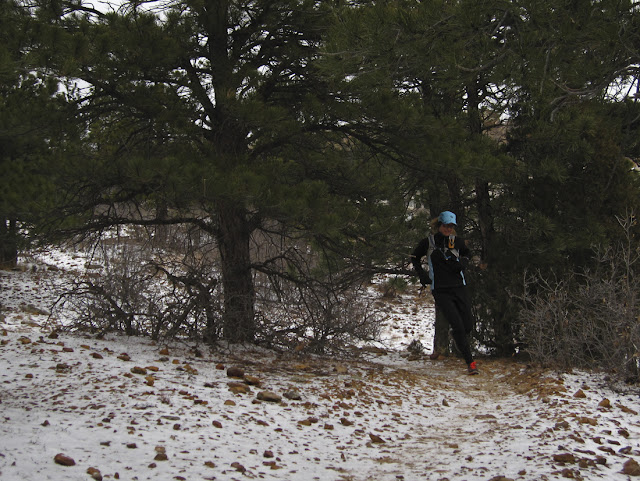 Kathleen drops in off the west ridge 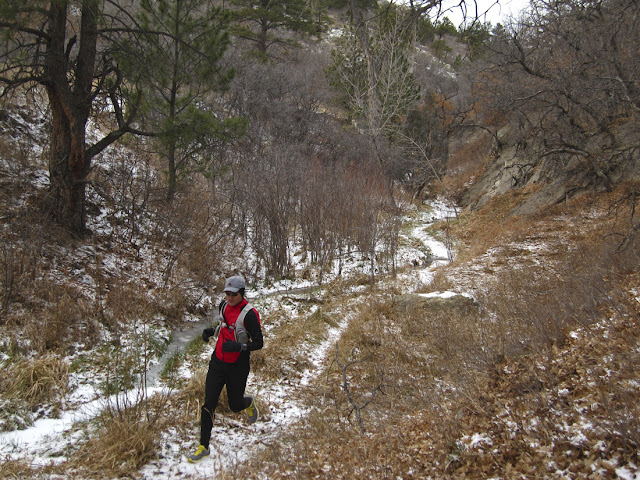 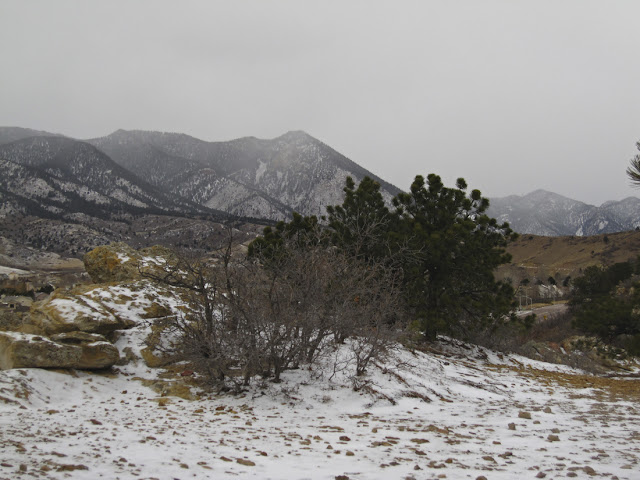 Weather moving in fast and we're headed home!
While we mostly avoided the wind, we did not outsmart the cold.  At 7.5 miles, we threw in the towel, cried Uncle, whatever you want to call it.  Judging by the peace and tranquility on the trails, most (sane) folks hopped on a treadmill in a warm room somewhere.  A venti Italian Roast at Starbucks at least made a segue into warming me up post-run.
Shoes - K Nike LunarFly Trail
S -Nike Pegasus
Now for the good stuff! 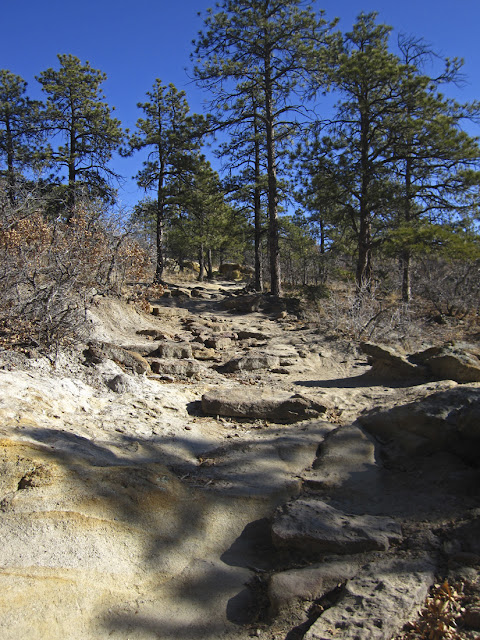 Sweet, technical, DRY trails beckoning us
Today, under vastly different conditions, we headed over to Palmer Park to get in some great trails.  This used to be our summer post-work run.  However, rampant riff-raff and various seedy issues have caused us to avoid evening visits to this park.  Sad how "that" element of society can dictate public use of such an awesome park but it is what it is.  With an inviting cerulean sky and beautiful trails awaiting we took off on what we hoped to be a great run. 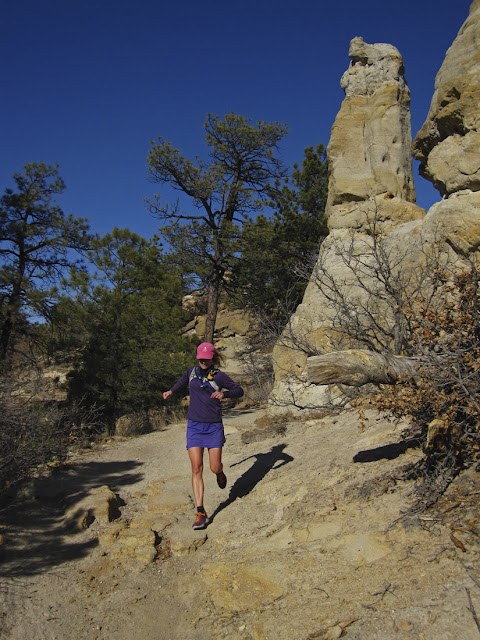 Kathleen gets things rolling early on the run 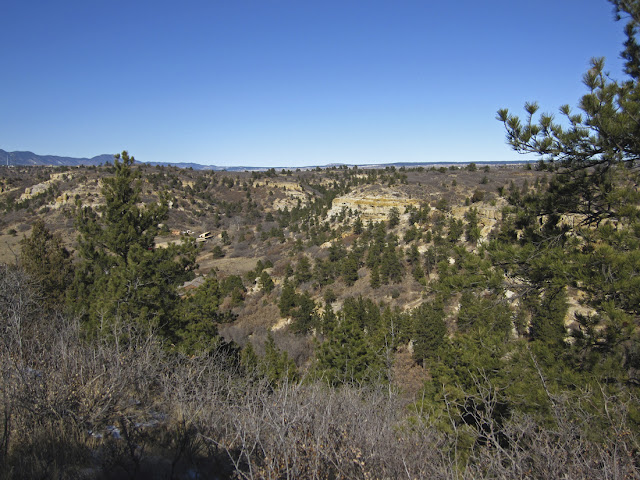 Doesn't look like we're right in the middle of the city?
Palmer Park is one of those rare gems - a rustic, mostly undeveloped park with unbelievable trails that is right in the middle of the city.  Land locked in between neighborhoods and heavy traffic, this jewel has  awesome trails and great rock formations.  Many of the trails are on the techy side, so there are a lot of hardcore mountain bikers that frequent the trails here as well. 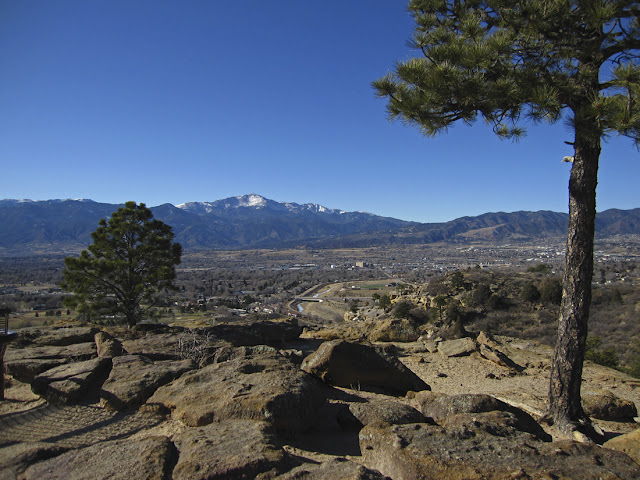 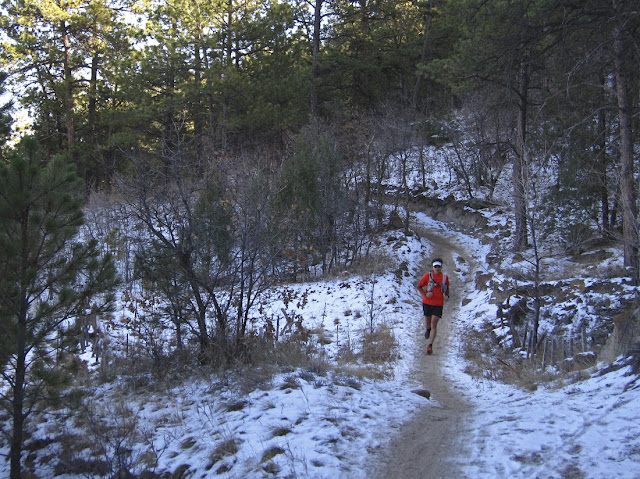 Some snow hanging on the northern trails 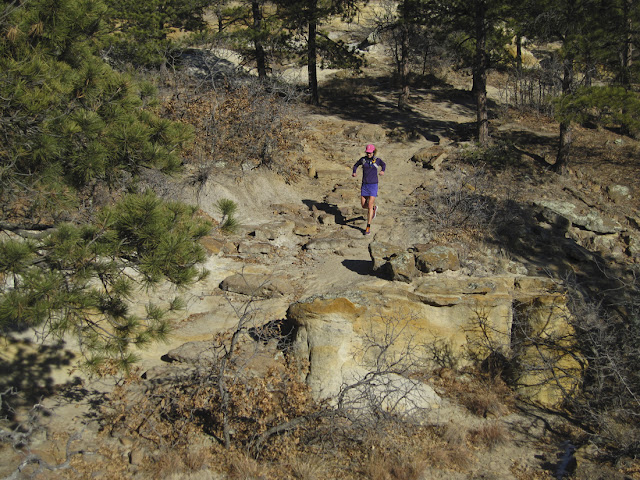 Kathleen rocks the final , sunny descent
As we had hoped, the weather was fantastic and the 40's felt like summer after last weekend.  We were able to get in 12 miles on some premiere trails and absolutely enjoyed our run.  Days like this in December are special and we often squeeze out of them the maximum we can for the day because it could be zero next weekend.  But it wasn't today, life is good!

Happy Trails this week!
Shoes - K Nike LunarFly Trail
S - Saucony Peregrine
Mid-Week Special
Unbreakable: The Western States 100
Wednesday evening, we had tickets to see a screening of "Unbreakable" to benefit Friends of the Incline.  Great cause, and a good reason to get out and see a well done documentary covering the 2010 Western States 100 race.  If you get the chance to see a screening of it in your area, we would highly recommend it.  It is being released on DVD next week as well - link to the website from the caption under the video.  After the film, we were privileged to have these two guys spend a little time doing QnA - good times: 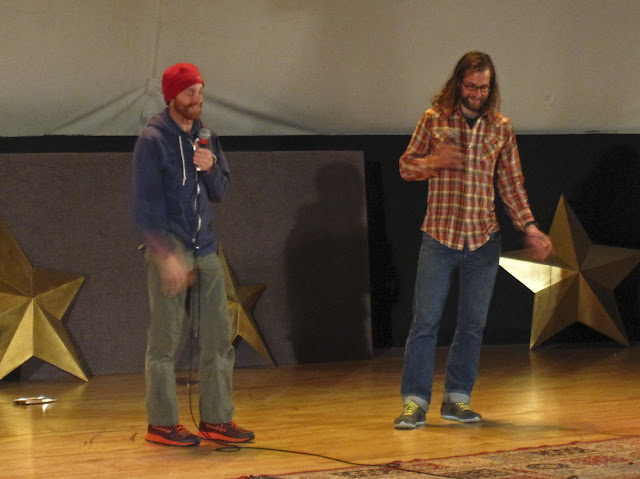 Geoff Roes and Tony Krupicka (in case you didn't recognize them...)
Scribed by HappyTrails at 9:18 PM 15 comments: