It's cool in them there hills 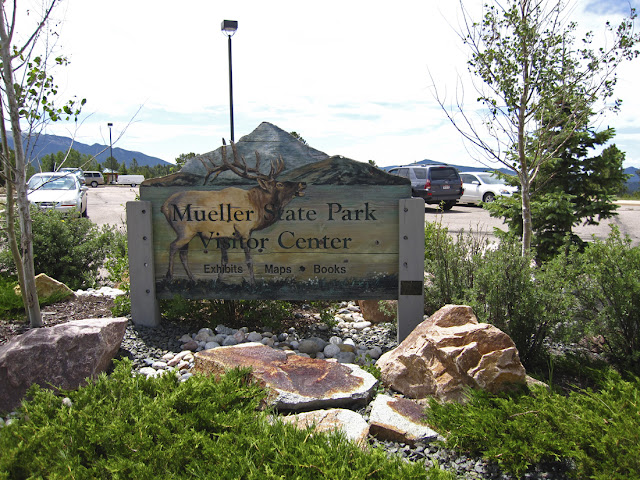 Last Sunday morning, we took off early to head into Mueller State Park near Divide, CO, for a trail run.  It was cloudy and very muggy at home but was supposed to warm up rapidly, so the half hour trip up the pass to run above 9000' elevation sounded like a solid plan.  We visited Mueller a month ago to try out some trails, and at that point, only half the park's trails were open due to elk calving.   So we had in mind to run the "other side" on Sunday, including a large loop we had done years ago on skis.  It was nice and cool, in the low 60's when arrived, but also quite humid.  Since we last blogged we have encountered a meteorological breakthrough - July Monsoon started and we have had at least some rain for six straight days (and it is raining now as I type).  With the rains has come humidity - an oddity for us and most likely short lived - which does not mix well with altitude and minimalist oxygen supply.  But the cool air sure was nice, so we sleeved up and hit the trail. 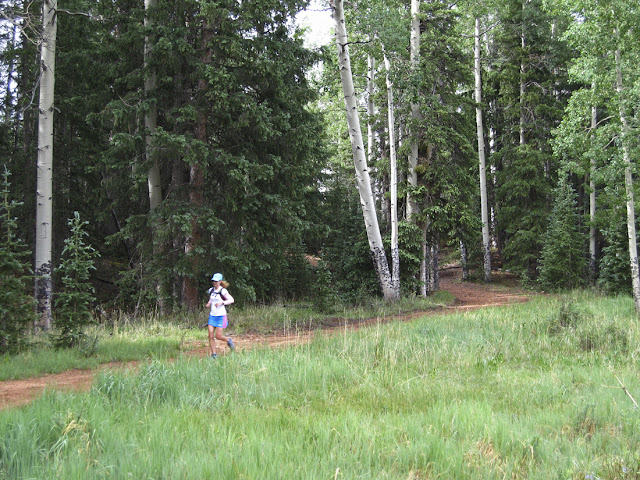 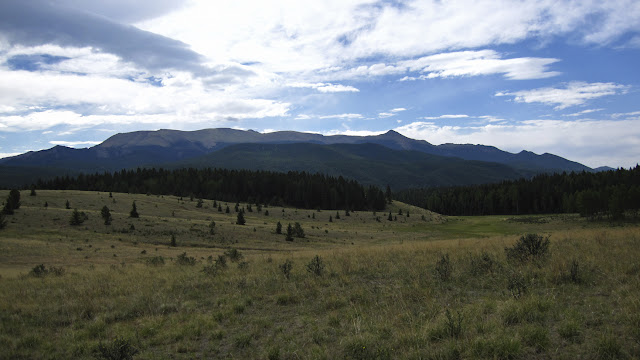 Morning clouds shadow the back side of Pikes Peak 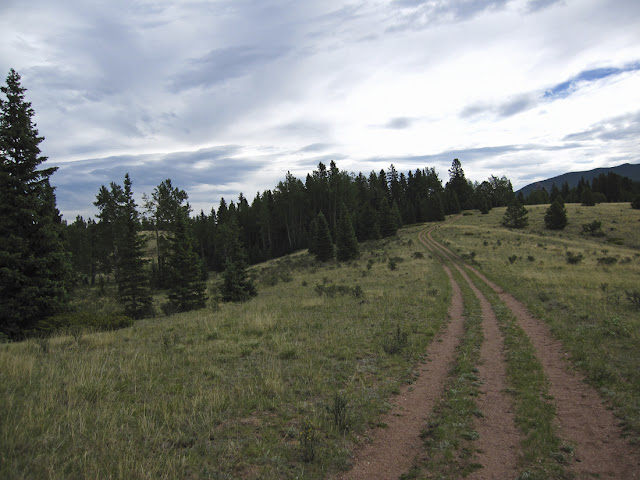 Who needs singletrack - go for Tripletrack!!!
We started out from the visitors center and ran over to catch the Elk Meadow trail, then ran it out to the Cheesman Ranch loop.  These trails alternate between shady forested paths to wide open rolling prairie grass.  As scenic as this park is, we saw almost no one the whole time we were out.  Aside from people really close to the parking area, we saw a mountain biker and two sets of hikers - that's it.  Talk about having the trails to yourselves. 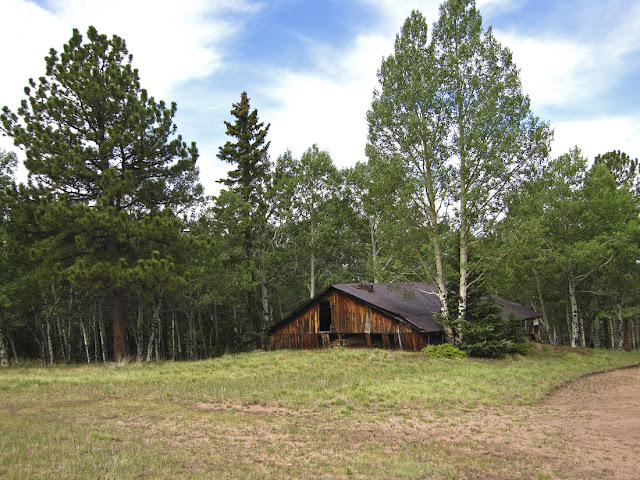 Old collapsed barn - a deer came out the side "door" as I approached
and I nearly dropped the camera from the startling it gave me! 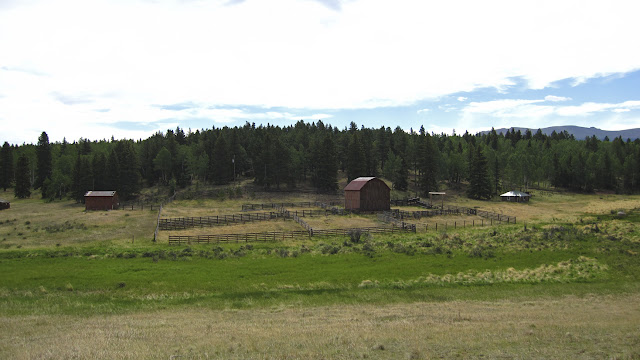 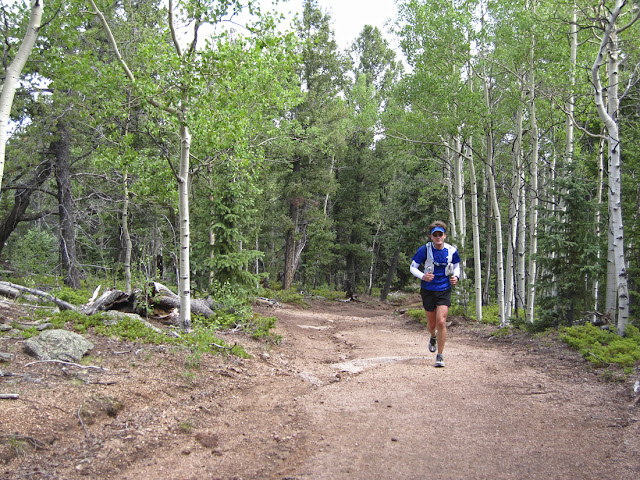 Almost to the top - Cheesman Ranch Loop
The trails on the northern half of the park, while more mellow in grade, follow the similar pattern to the trails we ran last month on the southern half.  The main road in the park is on the high spine, approximately 9800'.  All the loops start down, go through rolling areas, then ascend back to the spine.  We really like to finish on downhills - don't point fingers - YOU DO TOO!  That does not happen here.  So after a long loop out on Cheesman, we finally made it to the top and decided to head over onto the Homestead loop and connect over to the Revenuer's Ridge trail we liked so much. 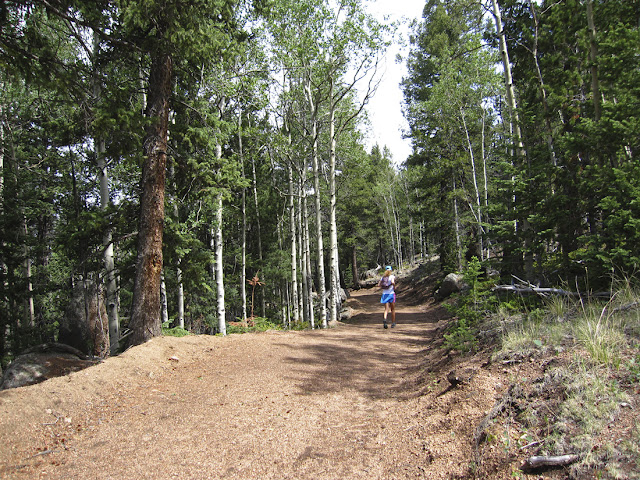 Starting out onto Homestead - dropping our hard earned elevation 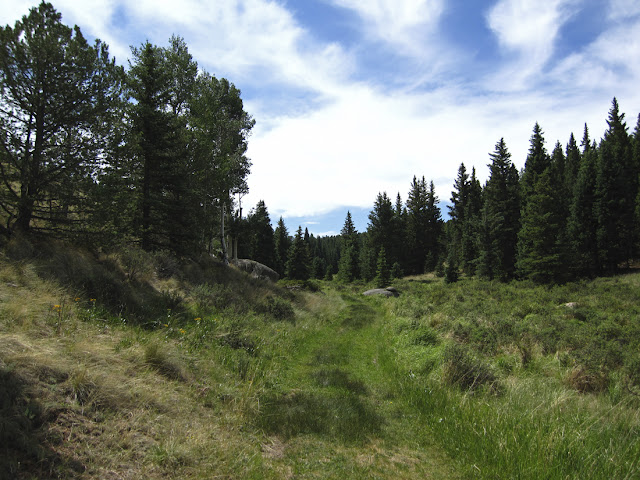 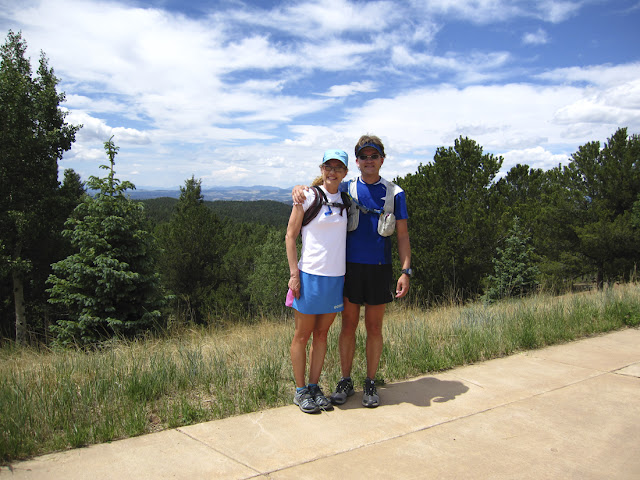 All finished - a nice tourist from Longmont, CO took our photo for us!
We enjoyed the trails we ran on the north part of Mueller and finished out our run just under 12 miles.  The elevation on the run ranged from 9200 to 9800 feet and the total climbing was around 2000' for the route.   It ended up being a fabulous day for running here as temps were in the low 70's when we finished - plenty warm when you are 2 miles closer to the sun!!!  Both of us had a good run and didn't really feel like pushing on any farther.  This area, as well as Rampart Reservoir nearby, give us good options for close proximity altitude training - gotta figure out that vexing little altitude issue I have going one of these days :)
Shoes - K Montrail Masochist
S - Pearl Izumi SyncroFuel XC
* * * * * * *
In other news, gotta throw out a huge congratulations to our friend Tim on his finish at the Hardrock 100 - you need to read his race report, then sit down and chew on it for a while - it is gritty, raw, a bit disturbing, but also a compelling look into arguably the hardest ultra out there.  Hats off to JT also for doing a heck of a job pacing Tim in from Telluride to the finish.
There is a video that has done laps around the net in ultra circles that also gives some insight into how this race tears you down to raw existence from John T Sharp's experience there in 2010.  You can see the "bigness" of this race a little bit in his video account.   I will warn you ahead of time, as his weariness builds, his language degrades noticeably - not in a vulgar way, more in a "I'm getting beat down by this race" way.  Just be warned and send your kids out for ice cream ;-):  http://www.youtube.com/watch?v=Hi93ivFcvy0
Scribed by HappyTrails at 9:53 PM 7 comments: