If you are So Inclined!

Our initial plan for the weekend was to head to the mountains.  We nixed that idea when the weather forecast for the area we had planned looked sketchy.  We'd rather save the drive time and money for a pristine weather weekend.  We were twiddling our thumbs with no definite weekend running or riding plans when we received an email from our friend Jill late last night wondering whether we would like to join them for a climb up the Incline this morning.  I responded a very enthusiastic YES (I LOVE the Incline - it is a great, quick, intense workout that is a nice change of pace.  Steve isn't as enthusiastic about the Incline as I am - he usually goes along mostly to humor me, I think.  LOL!)  One of Jill's sons, B, and a friend of Jill's, are training for a climb up Mt. Whitney later this summer.  Jill's other son, R, and another friend rounded out the Incline group today (as well as hundreds of our 'closest' friends - the place was swarming with people!). 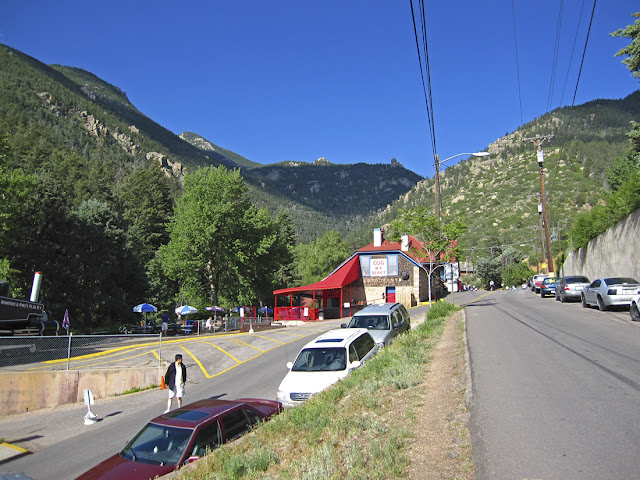 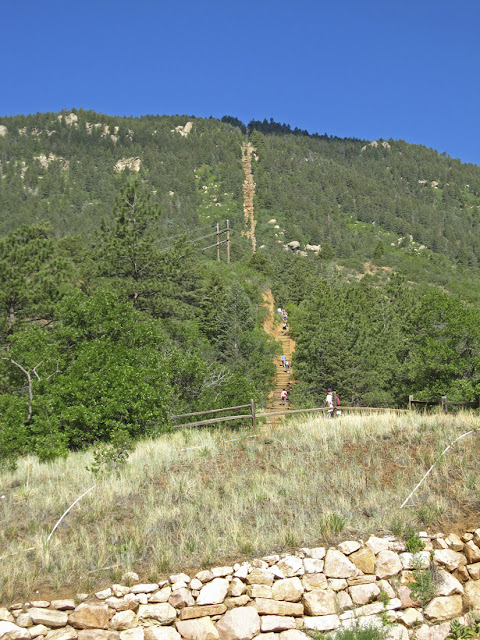 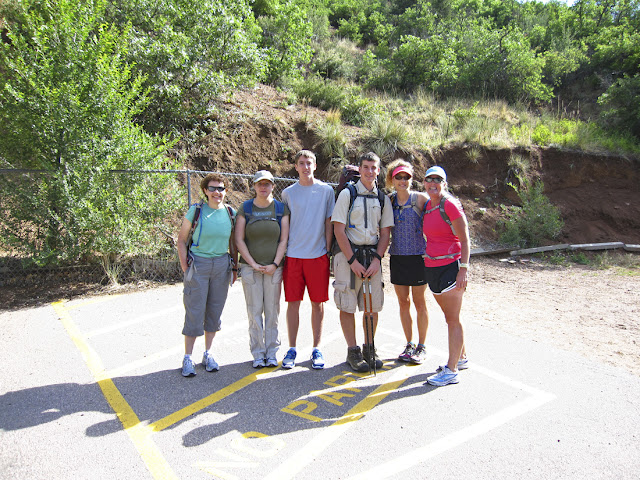 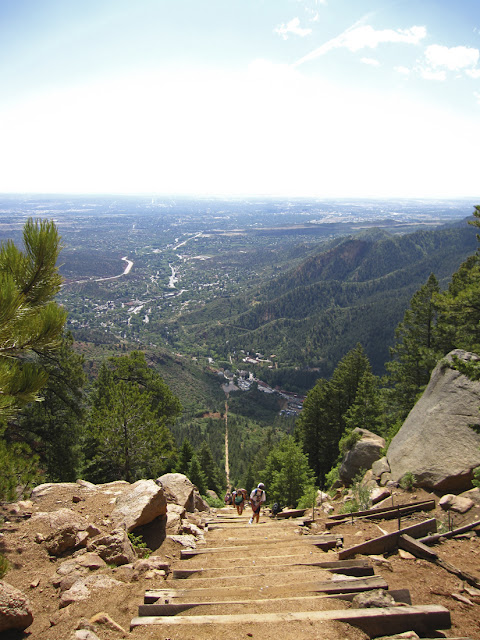 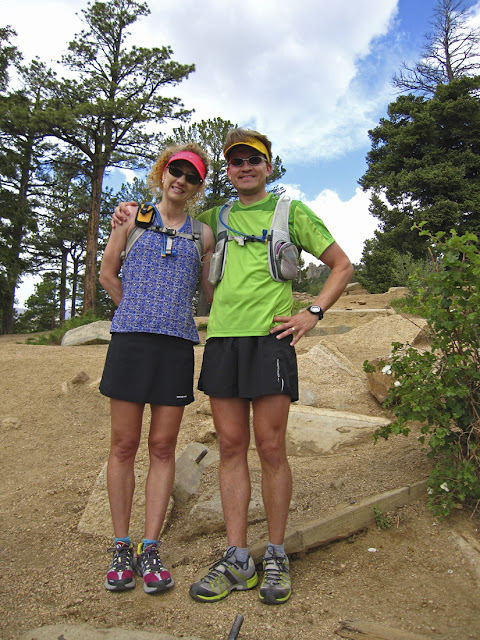 Obligatory Happy Trails group photo, of course - at the top

It was kind of neat hanging out on top for a bit, watching and listening to all the people cresting the last step.  There were many locals but probably lots more out-of-towners, no doubt 'duped' into climbing this critter by their dearest friends and family.  Seeing and hearing their excited expressions at completing such a challenging climb was a lot of fun for us.
Saw lots of Vibram Five Fingers going up but heard quite a few comment that there was no way they were running down Barr Trail in them.  Some ended up hiking back down the Incline (no thank you), some hiked down Barr, and we did see a few run down.  Looks too painful to me.  Steve, Jill, and I concentrated on a mid-foot strike in our nice springy shoes on the 4 mile-ish descent and think we did a pretty good job! 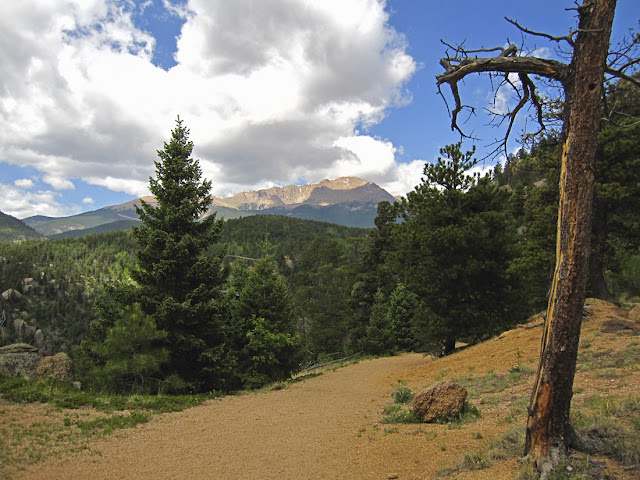 Majestic Pikes Peak as seen from the connector to Barr Trail 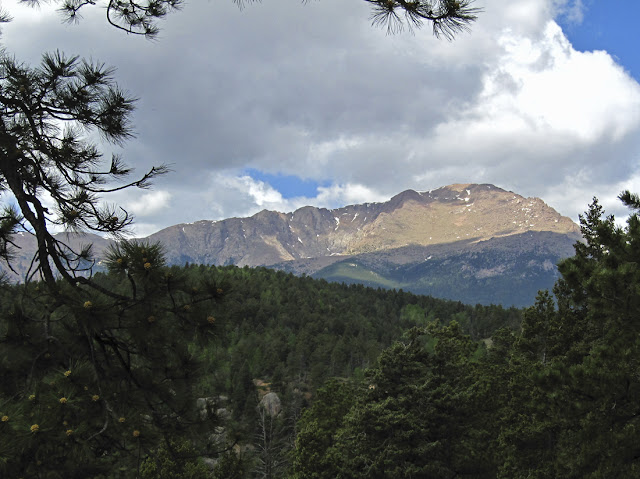 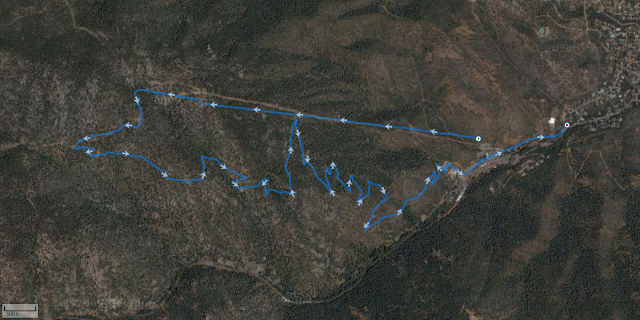 Today's route
After we all re-convened at the bottom of Barr Trail, we waded through the masses and ended up at Coquette Creperie in Manitou for some quality post run grazing.  Everyone seemed to enjoy their meals as all the plates were licked clean.  We ended a fun, satisfying day with friends with smiles on our faces.  Good times, indeed!
I wasn't sure what to expect up the climb today and was willing to take whatever came (ie, slow).  One of the things Graves Disease causes is muscle wasting and it has affected not only the strength of my legs and arms but also the heart and lungs.  I have been working diligently to rebuild and regain all that has been lost and today was a good indicator that things are heading in the right direction.  Steve and I crested the last step together in 34:56 - TOGETHER!
We have not been running together in months.  He mostly has been a very distant figure way out in front of me - a moving target of sorts, for me to aim toward.  It was a nice feeling to keep up with him today.   He is in really good shape and the Incline is NOT his favorite.  The fastest I have ever climbed the Incline is 32 minutes.  The fastest I did it last year was 33.  Those times seem to be within sight.  I was encouraged earlier this week when I rode 30 miles on the road bike last Monday and saw some hill climbing repeatability - about 3000 feet-ish.  Not fast, but strength seems to be lurking beneath the surface.  I felt GREAT.  Then, on my couple of before-work morning runs, I was able to notch it up a gear a few times (not much of a bigger gear but it was there and it hasn't been).  So combined with today, I am cautiously excited.  Steve says I should throw the 'caution' part out the window, celebrate, put on my dancing shoes (if I owned dancing shoes) but that's just how I roll -  a cautious realist.  It might get thrown out the window if I can get a few more consistently good weeks under the belt.  The 'magic' number I seem to be hearing from the docs and a couple of people is 6 months on the anti-thyroid med = feeling close to 'normal'.  I am at 15 weeks and keeping my fingers crossed.
Let's see what tomorrow brings!  Happy Trails All!
Scribed by HappyTrails at 8:53 PM 14 comments: