...At least for today!  After a 2 week span where we have had everything from sub-zero weather to fairly mild temps, we hit 62 degrees for the high today by the time we finished our run in Cheyenne Mountain State Park.   We will take that 8 days a week in January if we can get it - especially with single digit highs and snow headed back on Tuesday!!!  We were down at CMSP to have a little preview of a new event headed our way for late April - the Cheyenne Mountain Trail Race - with 25k or 50k distances offered.  Not like we need an "excuse" to hit the trails there, but might as well sniff out some of the race routing while we're at it! 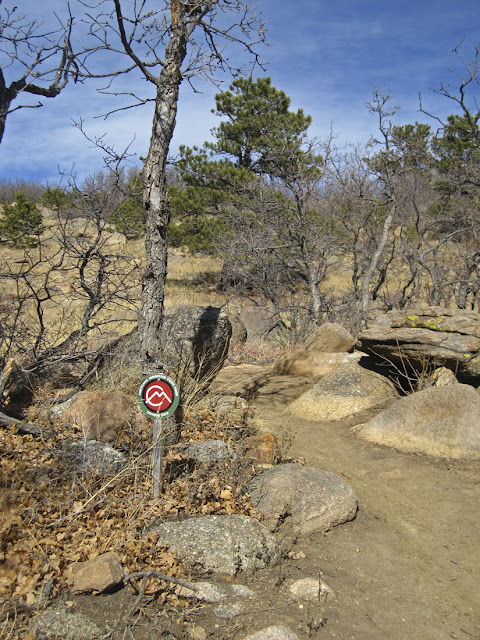 Coyote Run on a sunny day
Although we have run all the trails here many times, there are some directions on the route that are opposite of our "preferred" way to run them.  This is great because it forces us to see old trails in a new light - freshen things up a bit.  The run out Coyote Run and up Soaring Kestrel is a nice way to start the race, as it is a bit more of a gradual runout to get warmed up.  We were a bit nervous about thick mud with the mild conditions and heavy clay content at the park - and there was definitely some shoe-sucking mud - but for the most part, it was quite pleasant conditions for a mild winter day. 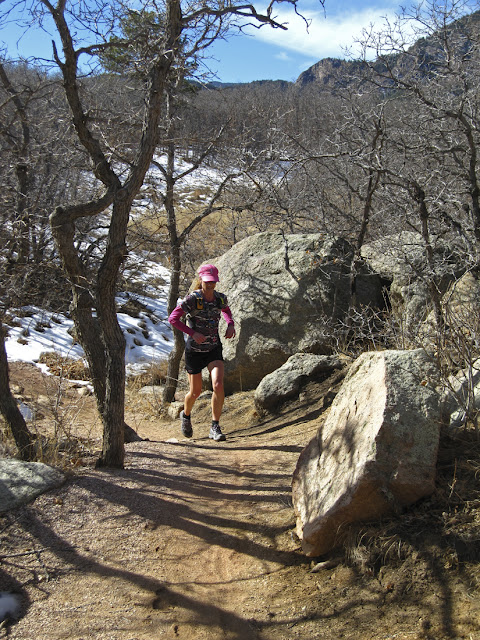 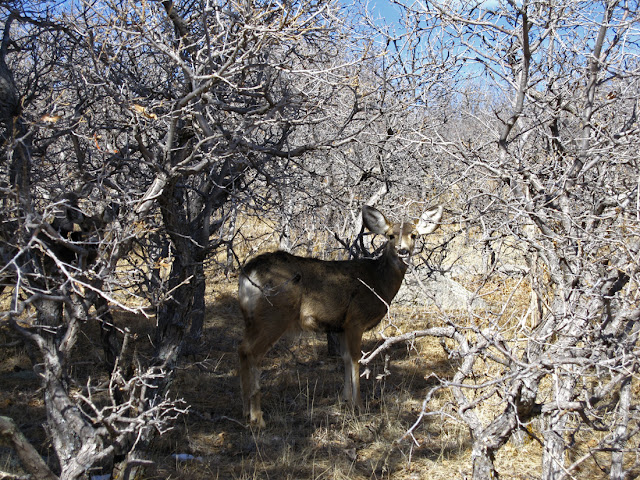 Startled some ladies at the "salad bar" on Soaring Kestrel! 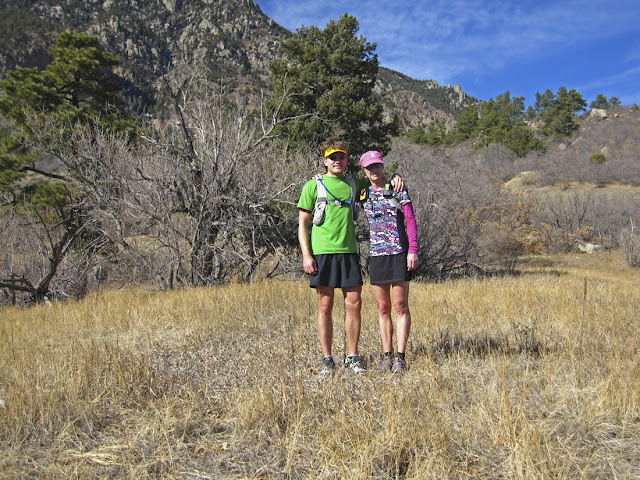 Catching a breather on Blackmer
All the trails up to the junction with Blackmer we had never run counterclockwise before.  It was all climb, but more manageable on the breathing than the route we typically start with.  Bodes well for a hot start to the race, especially for the elites at the front.  Blackmer gets a bit more technical on the footing and was also our first spot of bother with the thick, slimy mud that the clay top layer produces. 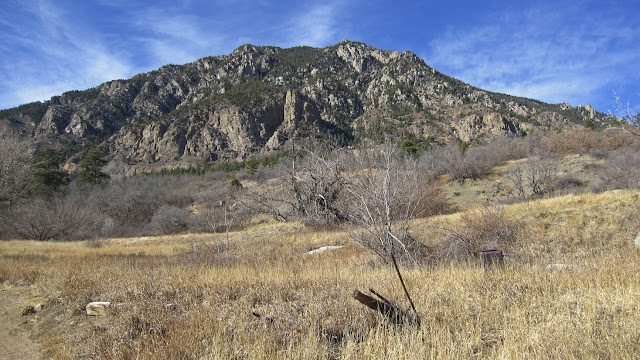 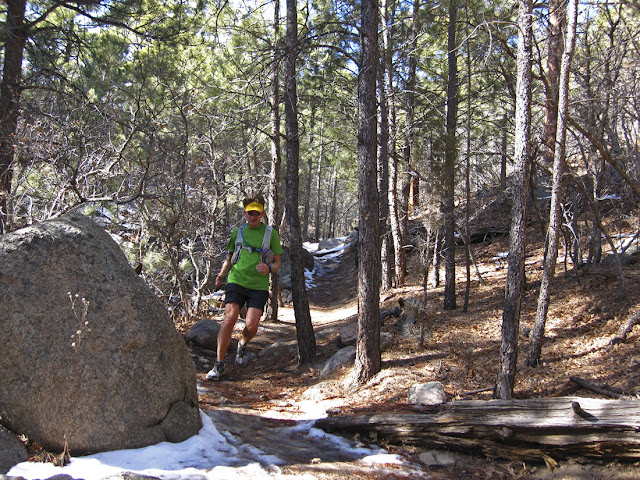 Some ice on the upper reaches of Blackmer 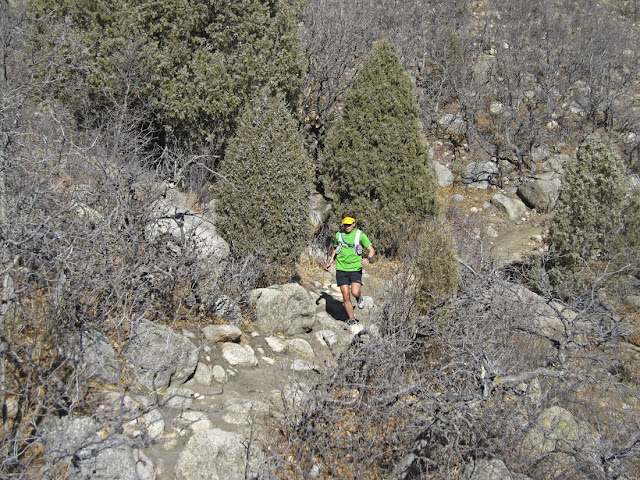 Medicine Wheel - the ankle gobbler
After completing a counterclockwise lap on Blackmer, the route drops down Medicine Wheel - the most continuously technical stretch in the park.  If you fall asleep mentally through here, ankle sprains or premature dentures await - there is not a boulder-free stretch on the trail.  It is a great run down when you are "on" as the mind is engaged and endorphins are cranking!  Due to the long, steep stretches of exposed clay on the upper Talon loops, we bypassed this today in order to spare the trail conditions.  This lollipop adds about 4.7 miles.  We finished out the bottom part of the course, and it appears to come up about a mile shy of being a true 25k - will be interesting to see if the RD actually measures and corrects this by race day... 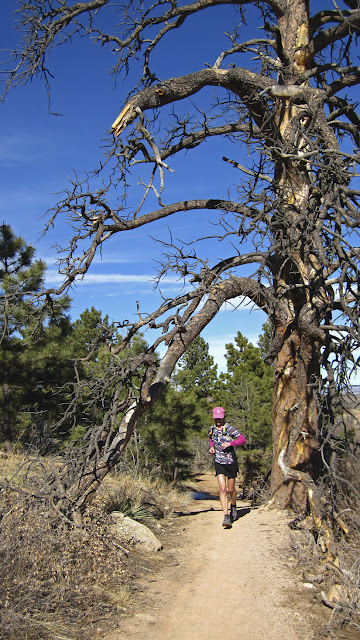 Kathleen cruising Sundance Trail
After running the part of the race course we were scouting, we added an extra loop around the base of the park.  After all, how could you reel it in on a day like this???  Finished with 13.5 miles and ~2000' vertical, muddy legs, and sheepish grins from pulling off a run like this mid-winter!   This could be the replacement "event" we were looking for instead of running Greenland again - we'll see!  Today (we hope) was the beginning of our climb out of the base-maintenance phase we have been in for a couple of months now.  Time to start rebuilding the fitness!!!
Shoes - K Asics 2150 Trail
S Pearl Izumi SyncroFuel XC
***Must give some props to Pearl Izumi while I am at it:  My first pair of SyncroFuels started to come apart at the bridge under the arch.  I shipped them up to their HQ in Louisville, CO and a week later the spiffy new pair I wore today was on our door step - Fantastic customer service for a "smaller" player in the shoe market!!!***
Scribed by HappyTrails at 8:23 PM 12 comments: