Got up a little behind schedule on Saturday morning (hey, it's winter...) so we had to squeeze in a quick, COLD run before Kathleen had to head to the office for a while.  We were able to do about 5.5 miles, starting in a half-sleep stupor, but awakening quickly in the chill of a gray winter morning.  The weatherman was "threatening" some sunshine ahead of another arctic air mass and snow on Sunday.  Since we already had two days in the teens for highs this week, any hint of sunshine and balmy 30 degree temps was enough to get the hopes up! 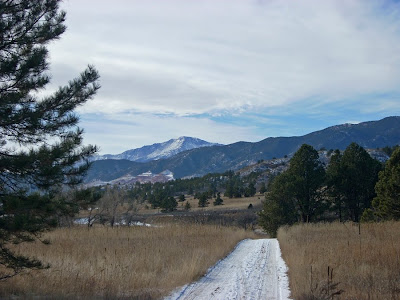 So after Kathleen headed out, the sun "sort of" came out and I put some dry clothing on and scooted over to the Santa Fe trail to get a second run in, just in case Sunday's storm materialized and limited the running possibilities.  Most of Santa Fe was lightly snow covered, as seen here with Pikes Peak behind, and there were some tricky areas that had solid ice hidden below the top coat of snow. 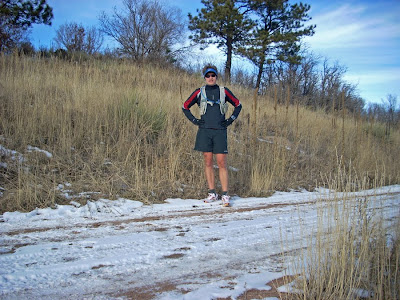 But, for the most part, it was some snow with very tiny patches of exposed dirt.  Although only in the 30's, I went for the shorts as the forecast was for the next 5 days being below 27 degrees.  It was good but you would not want to stand around - keep it moving! 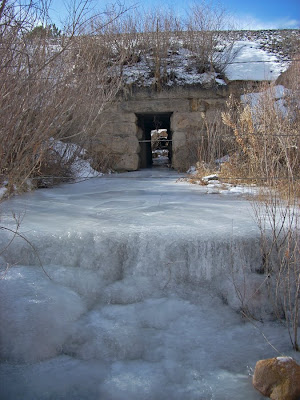 Awesome ice flow under the railroad drainage - that is almost 2 foot thick already! 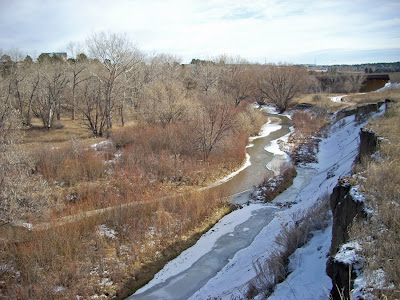 I was able to sneak out another 8 miles and felt pretty good at the finish.  I liked this shot of Monument Creek partially frozen near the end of the run.  It was a good day, although I am not quite used to the double run thing. 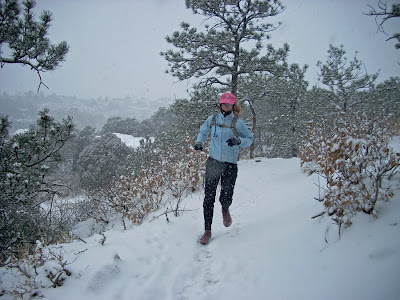 We're always nervous when the weather forecast is for 1 - 2" of snow.  That can mean you wake up to sunshine, or you're buried in it - but mostly somewhere in between.  The cold part they got right - woke up to 14 degrees with 1 degree wind chill.  There was already 4" fresh down when we decided to bundle up and still get in some semblance of a run.  So we cruised over to Ute Valley to give it a shot, with fresh snow falling the whole time we were out.  It is always quiet and peaceful to run on mornings like this.  The falling snow muffles all the environmental noises and the rhythmic crunch of snow underfoot sounds out the cadence of your run. 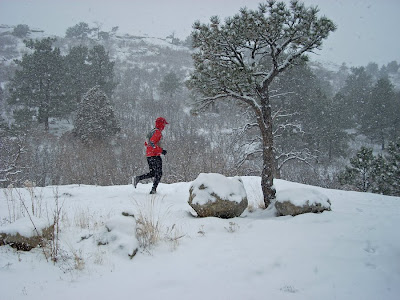 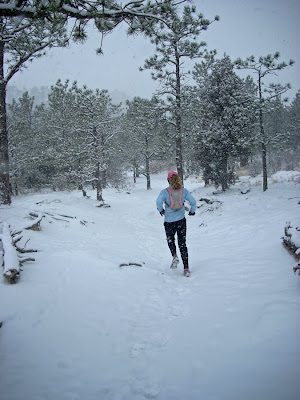 Another cool part of snow runs is the monochromatic imagery of the photographs that are snapped.  It is almost as if the colors of your gear are superimposed on a grayscale background.  We just did a short loop in Ute and then did some flat trails to the west of the park.  The flat light that fresh snow creates, along with the depth of the fresh powder, made the technical running a bit on the sketchy side.  No need to sprain an ankle on a day like this.  We finished with about 6 miles and fatigued legs - snow runs, especially when you break trail most of the way, are quite taxing on the legs.

We got cleaned up and headed over to the Peak Grille for a late morning breakfast date!  Breakfast burritos after a snowy run - mmmmmmmmmm!  Then it was home and Kathleen was on the frantic knitting schedule - trying to get some things "sewn up" for the mothers' for Christmas and time is slim!  Since our run was short, we saddled up for a road ride, er um, make that a trainer ride in the afternoon.  Get in a little duathlon training on a cold day, right? 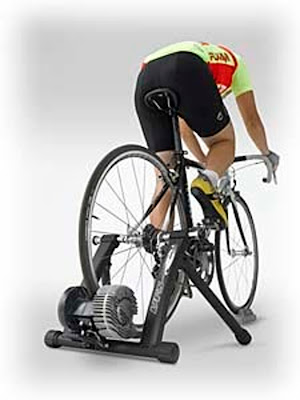 For those who don't ride, the contraption pictured above is a trainer.  You hook your bike up in front of the TV, set some resistance, and ride indoors.  Comes in handy in the winter, but to be quite honest, is a bit on the boring side.  Never ran on a treadmill, but could be similar I guess - outdoors is always better.  (Unless outdoors is covered in 7 inches of freshies and now sub-10 degrees.)  All in all, it was a good day.  Happy Trails - and anyone who wants some snow is more than welcome to take it!!!!!

Scribed by HappyTrails at 8:27 PM 9 comments: