Dropped in to Estes Park mid-week for a little battery recharge at the eastern portal to Rocky Mountain National Park. We were not sure what we would find on the trails here after last week's storm, even though they received a bit less snow than the Denver foothills. Above 7500', there is always a good chance that snow in November will last until June. We were, however, continuing with our weather bonanza as the remainder of the week was forecast in the 60's with sun - unbelievable Indian Summer for this late in the fall. 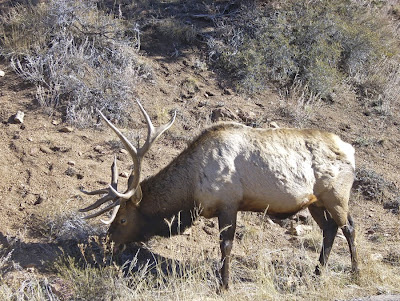 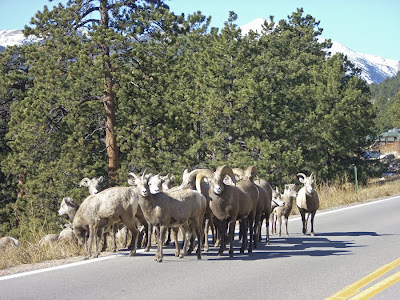 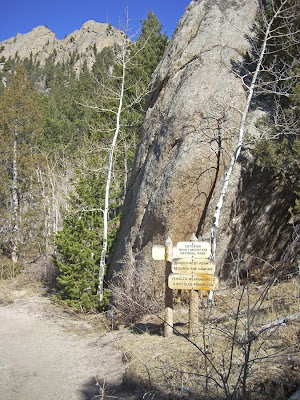 We were eyeballing a couple routes that are a bit lower in the park - Lumpy Ridge Loop was our first pick. On the northeastern corner of RMNP, Lumpy Ridge sits at the base of the Mummy Range and is made up of a bunch off odd granite ridges, giving it a "lumpy" appearance. These granite walls are popular climbing routes and we saw several folks hiking in to climb. The loop is formed by the Black Canyon, Cow Creek, and Gem Lake trails. We headed out on Black Canyon trail to ascend the west rim of the loop. 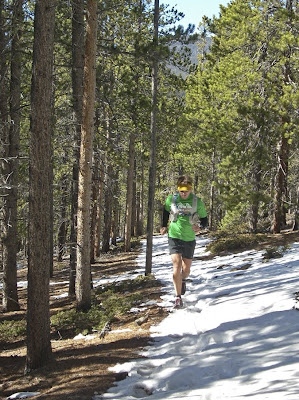 The front side of Black Canyon is south-facing, so it was clear sailing (or running!). As we ascended the western saddle, snow became intermittent along and in the trail but was passable. With steep pitches of 15% and higher, you quickly find yourself 1500' above the canyon floor and the snow takes a more stubborn hold on the trails. I always enjoy climbing through the snow in shorts! 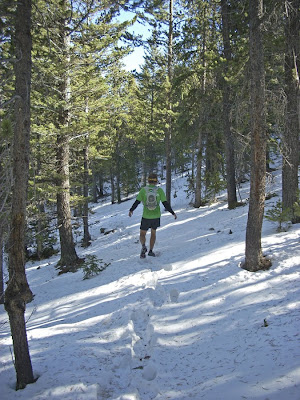 After gaining the western saddle and dropping into the Cow Creek drainage, it quickly became apparent that the northern side of Lumpy would have to wait for another day. Steep descending and shin deep snow with no traction devices put an end to the thought of doing the whole loop. We'll be back... 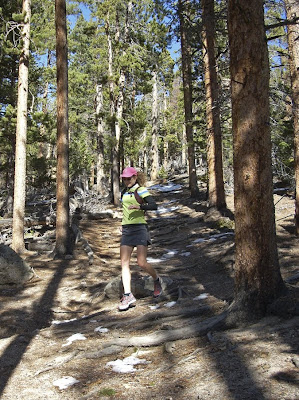 One good thing about the back-track - 2.2 mile descent with1500' drop - bomb those quads! Kathleen slaloms through the pines, rocks, and roots on the way down. 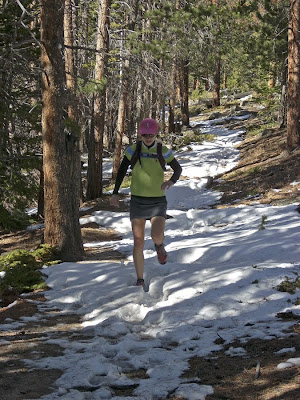 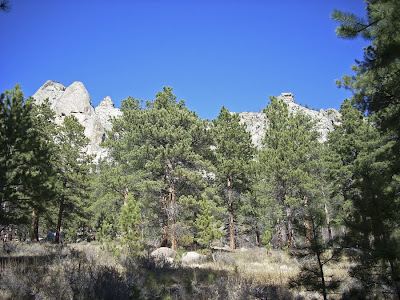 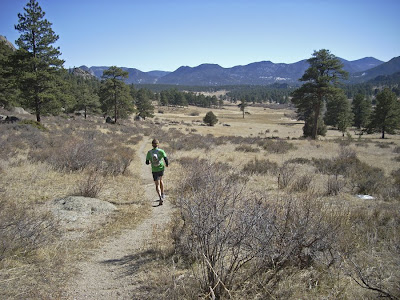 Running out through the Black Canyon trail, much of which passes through the MacGregor Ranch. These folks had the foresight to deed the ranch (or large portions of it) to RMNP to spare it from development. We are thankful for that as it would be a drag to run this 10 years from now, lined with condos! Kudos to the MacGregor family. 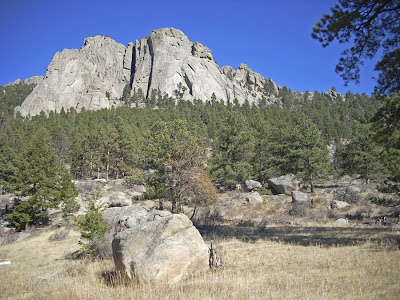 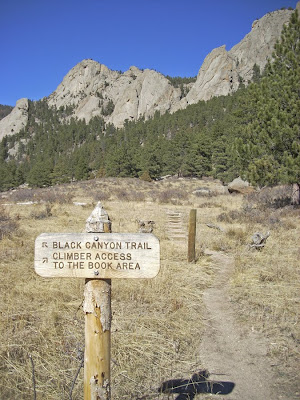 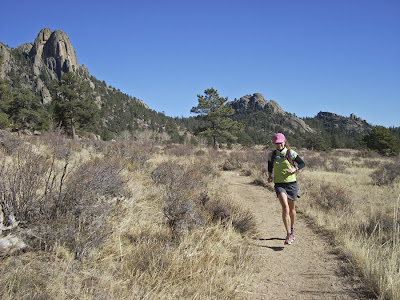 Kathleen running under the Twin Owls, near the junction with the Gem Lake trail. 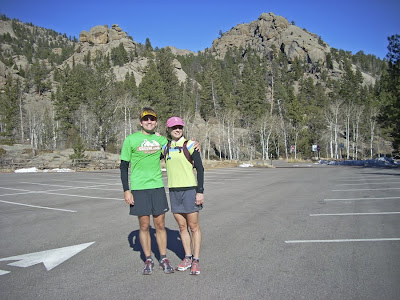 A relatively short run with high scenic value, we finished with 8 miles and big smiles! Running under brilliant sunshine in the late fall, we had a fantastic day on the trails. We can't wait to come back and run the entire loop.

Floating effortlessly along the bucolic countryside, the fresh farm air infused with much more oxygen than usual, we are mesmerized by the metronomic cadence we are able to maintain and by the crunch underfoot of - PAVEMENT? Are you kidding me...? Read on. 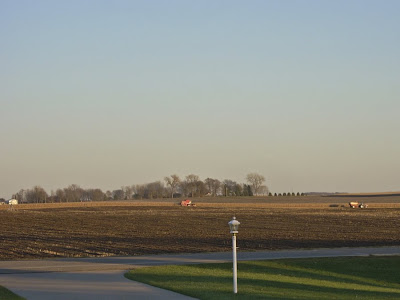 Last weekend we hopped a quick flight out of Denver and headed over to visit Kathleen's family in Iowa. Her mom's prognosis is on the dim side as it appears she is losing a battle with appendix cancer. We wanted an opportunity for Kathleen to have a nice visit while mom is still able to be up and about. We also know that we are getting to the sketchy weather months between here and NW Iowa and we hit the weather jackpot for our trip. Just two days before we left, DIA registered in the 20" range of snowfall, but we left under sunny skies and mild temps on Saturday. We brought our warm and sunny with us to Iowa as well - sweet! The corn farmers are working OT to get the harvest in, as seen in the pic above. As for the Happy Trails part, if you have been reading for any length of time, there are none here. Well, one 2 mile sort-of trail but that's it. So it was, gulp, road running - and no photo evidence that could incriminate us in the future... No offense to you die-hard roadies, but dirt is where it's at. Period. We slugged out 8.5 miles Sunday and 5.5 miles Monday and that was all we could take. It is, however, sweet running at 1400' elevation when you live at 6800' - it is like having an extra oxygen tank built in!!! 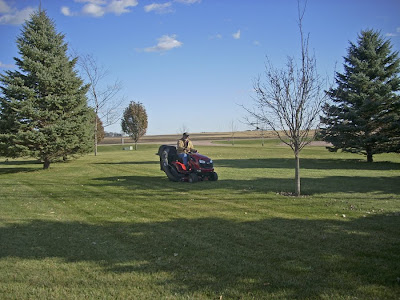 K's dad out mowing the north 40. Well, not quite, but a 2.5 acre immaculate lawn takes a bit of work. Two and a half hours on a Craftsman 54" mower with a couple stogies thrown in and that is dad's "quiet time"!! 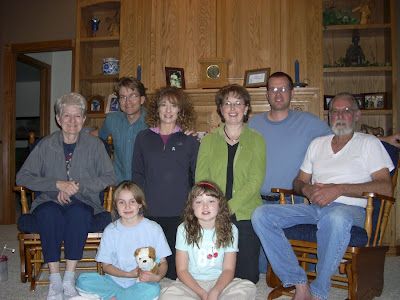 We had a really nice visit with the family, and as always, got to spend some nice time with K's brother and family who live in the same town. 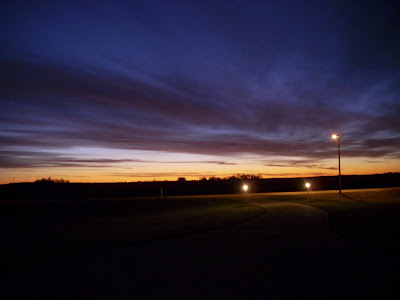 Got a nice visit in and had some awesome sunrise vistas over the cornfields. It was bittersweet leaving, knowing that savoring life's finer moments often involves capturing memories that sustain us in the future. So it was that we took off for a return to home - Colorado's mountains. We would be taking a little down time to process and unwind in Estes Park, gateway to Rocky Mountain National Park - stay tuned...
Scribed by HappyTrails at 2:08 PM 5 comments: