After we intentionally eased back on the running through the month of December (and probably through January), I planned on spicing things up for the start of 2011 by doing the Rescue Run 10k. A race that benefits El Paso County Search and Rescue, it is a fun and challenging course that winds through the hills of Palmer Park.  It utilizes a combination of paved  and dirt roads, providing sweeping views of the Front Range.  Unable to coerce convince Steve that he would enjoy running it too, I was on my own (although he came as my cheerleader).  The primary goal of running the race was to use it as a hard tempo workout - to shock my semi-hibernating, slow body awake.  Other than that, there was no objective - work hard for a few minutes and have FUN!


We ran into our friend, CW, before the start.  She is one of our local elite women and I knew she would win today.  We have known she and her hubby for 13 years or so, originally meeting through a Young Marrieds class at church.  Funny thing - she used to 'taunt' Steve and I, daring us to come over to the 'dark side' (ie: become runners) when we were exclusively cyclists.  That 'taunting' went on for years and years.  Then one winter, tired of going out in the cold on our bikes, we decided to try some cross-training - that's where our running took root, more specifically, trail running.  We did a few years of winter cross-training and Spring of 2011 will mark 3 years of 'full-time' running, now using cycling as our occasional cross-training.  I guess we have crossed over to the dark side........ 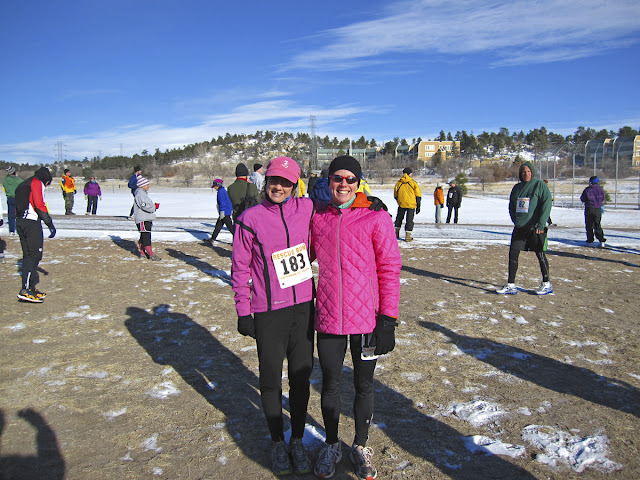 Me and CW before the start....See how close I am standing to her???  I am hoping that some of her 'strong and fast' will rub off on me!  I was also eyeing and scheming on that pink down jacket. Hmmm, we are about the same size...... 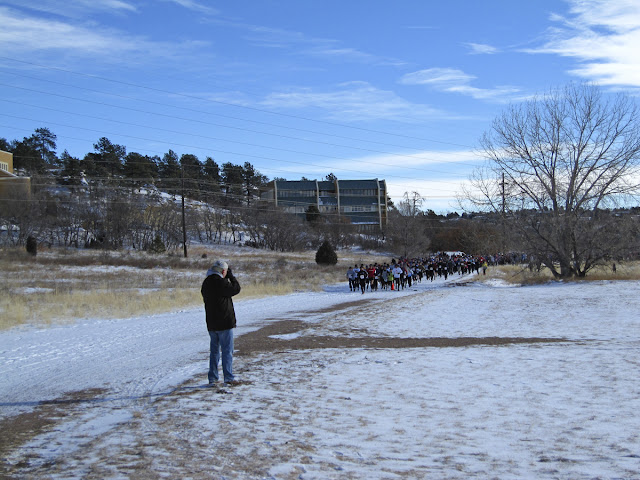 The stampeding thundering hooves at the start......
Temps were quite brisk at the start - low single digits with below zero windchill.  The race officials were encouraging folks to wear either screwshoes or some sort of traction device on our shoes as the paved portion of the course was quite icy and treacherous.  It is a very hilly course, with some short sharp pitches in the shade - those sections would prove to be the most tricky.  I chose to wear Screwshoe Lite (7 screws in each shoe) as opposed to Screwshoe Deluxe (13 screws in each shoe) and the Lite was JUST RIGHT!  Thanks Honey, for drilling them up for me this morning! 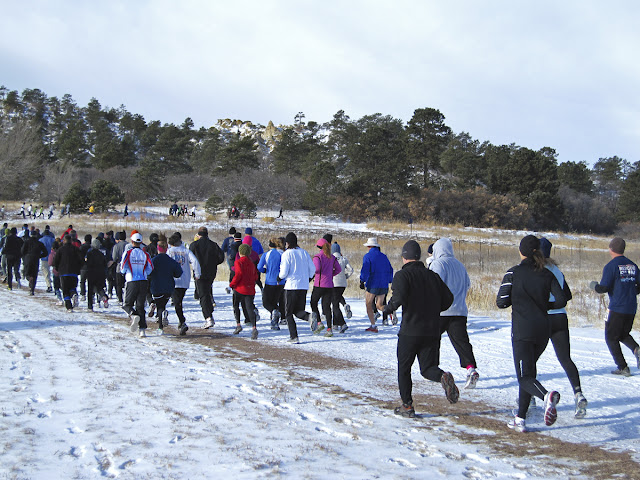 Can you find Mrs. Happy Trails?
My mantra for the day rotated between 'stay steady' and 'stay tempo'.
After making the right hand turn, above, we climbed some pretty good hills and the herd thinned out quickly after a mile or so.  It was funny hearing  the 'clickity-click' sound of screws and traction devices on the ice heading up the hills.  I fell in behind a couple of guys who seemed to be going my tempo so I just paced off of them for the next few miles.  I must make mention of the nice gentleman I was directly behind during that time - he was thoughtful enough to check behind him  (for me) and then move off to the side a bit to spit or blow.  I was highly appreciative of his conscienciousness - nary a drop reached me - thankyou Mr. Runnerman!
After running the dirt loop on top of the mesa, we headed over to the Grandview Overlook - a rolling out and back portion of road.  Halfway or so up the road,  the lead men came storming back toward me, heading toward the finish.  I kept my eyes peeled for CW, and sure enough, she was the first woman.  Then I started to count.  One woman, two woman, three woman, etc.  Why was I counting?  My only objective was to tempo, right? so who cares how many women are in front of me???  Oh yes, but I do care, in shape or NOT, unfortunately I do care.  I was 6th woman.  Since the realization hit that 'I do care' where I stood in the race's pecking order, I took a quick look on my way back and started counting again.  Two gals about 20 seconds behind and two more about 10 seconds behind them.  Uh-oh.  I was fairly confident I could 'hold them off' over the rolling hills that connected to the main road but my confidence ended there.  Because I am a more cautious descender, I fully expected the two closer girls to pass me on the way down toward the finish, about a mile or so away.  Halfway down the descent, part of my prediction came true as one  girl passed me, not blazing, just a little faster.  I just stayed steady, and being a realistic and somewhat logical person, expected the second girl to come by BUT hallelujah, she didn't!
A couple of guys came by, but that was it.  I made it to the finish, 7th woman. 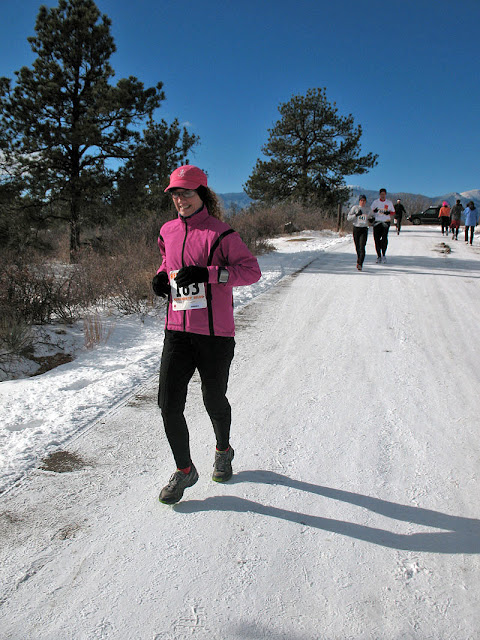 (above photo from pikespeaksports.us)
Heading back from Grandview, getting ready to turn onto the descent and await the inevitable passes. 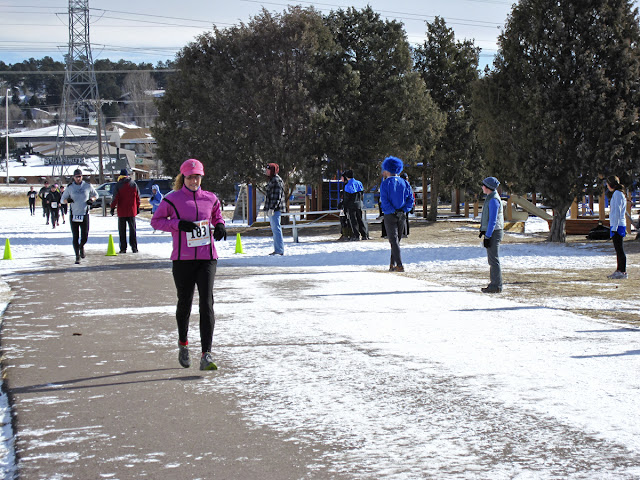 Happy to be finished with a good, hard tempo run.  And the bonus surprise:  1st place Woman 40-44.  Woo-hoo!
I did have a few silent moments of disappointment and despondent despair when I saw my finish time, though, as it was 3.5+ minutes slower than when I ran it in 2009 ( 40-44 age group win then, too).  The frigid cold, a few stretches of deep, chunked up snow, and icy conditions affected almost everyone today compared to the nearly perfect winter conditions in 2009 (which was a skirt day!).  I quickly put it out of my mind and tried to focus on the completed objective of a hard tempo run made even better by a decent finish, regardless of slow time.  I have to be mindful of our intentional cut-back on miles and intensity.  Final score:
1st 40 - 44 Age Group  - 15 women
7th overall woman - 79 women
54th overall - 279 finishers for the 10k
The Rescue Run certainly was a fun change to the normal routine.  I love the course and plan to do it whenever possible every year.  A BIG thanks to Pikes Peak Road Runners as they put on THE most well organized races, ALWAYS!  They are a well oiled machine - the best.  Because of the cold conditions and wanting to get people on their way, they did the raffles early and posted a list of those prizes for folks to check after they finished the race.  They did awards about 15 minutes after I finished and had printed results posted immediately and then just kept updating as runners finished.  I think full results were posted online by 1:00. Awesome!
Ok Jill - are you happy???!!!  I actually did a RACE!
Thanks to my dear Mr. Happy Trails Man for standing out in the cold cheering and freezing your fanny off.  You are the best!  :-)
Happy and blessed 2011 to everyone and may you spend good miles on many happy trails this week!

The gear that made me comfy in spite of the cold: