We seem to have misplaced our summer....

Never mind the fact that August came and went without much blog activity over here at Happy Trails Land, but where in the world did summer go???  One minute you are doing everything you possibly can to not run in searing heat (BTW, officially the hottest Summer on record for Colorado Springs, following one of the coldest Spring times...), then the next thing you know, the days are 100 hours shorter and you are shopping for deals on Icebreaker and Smartwool getting ready for cold, short winter days.  Wow.  Can we hit the rewind button?....

Well, anyway you slice it, Labor Day weekend has come and gone.  With it, we snuck in a quick trip up to Winter Park for possibly our last high country play weekend before the snow flies...  And on queue, we witnessed a snippet of just how short their summers are with Sunday's low down in the mid 30's - ouch!  It was only two months ago we visited and they were just starting to thaw from the heinously long spring freeze and now the leaves are changing.  So we had to make some hay while that sun was still shining!! 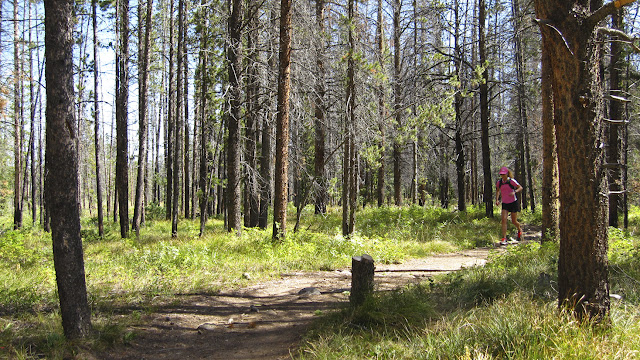 Saturday we headed over to Fraser to run some of our favorite singletrack out in the valley north of the ski area.  To our surprise, we saw a half dozen runners at it already, which is more than we have seen in a summer's worth of visits before.  Nice to see some folks are appreciating the trails on foot.  As we have said before, we have mountain biked just about every square inch of this valley (or somewhere near it!) and we are enjoying the freedom of seeing it in a totally different light by running the trails, just in smaller increments at a time.  So we were out in the Creekside, Flume, Chainsaw area for the day rolling up some nice trails with relatively slim traffic, especially for a holiday. 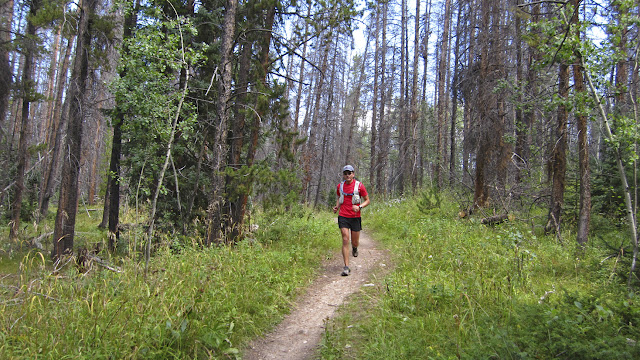 "Buzzing" along on the Chainsaw Trail 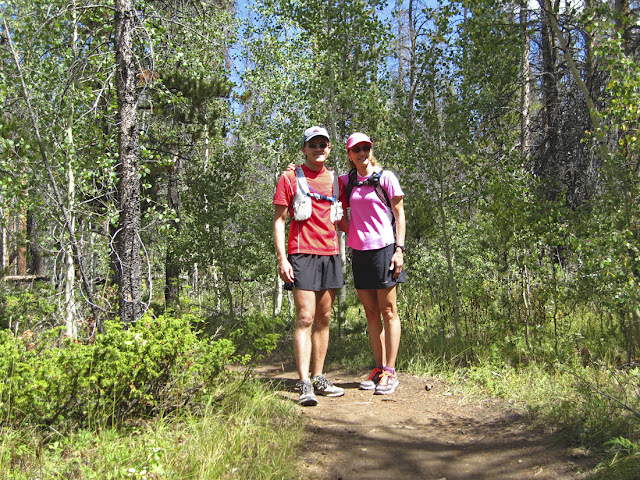 Stopped for a pose on the new cut of Creekside 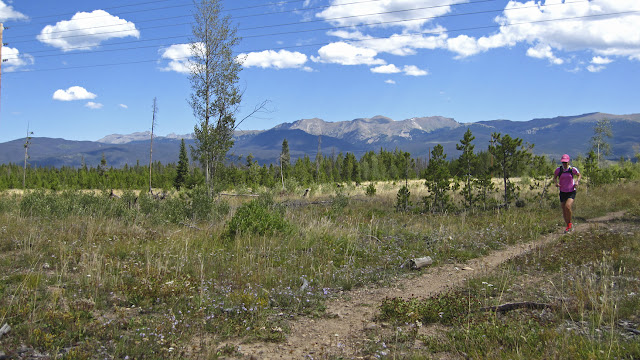 Kathleen on the Givelo Trail, with sweeping views of Indian Peaks Wilderness
and the Continental Divide in the distance

As is always the case, we enjoyed a spectacular day on  premium trails, all the while savoring the bluebird skies and basking in the Colorado sun.  Oddly enough, we had similar if not slightly warmer - daytime highs than were occurring at home, which was quite a weather shift!  While we were not in the hills looking for huge runs, we did manage to run a sweet 13 mile loop at altitude, making for a satisfying day. 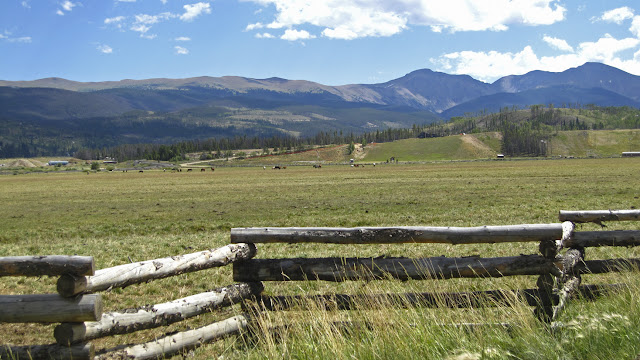 Horses graze, while Parry Peak (right) and James Peak (left) loom on the horizon -
soon they will be in their familiar, snow-covered state 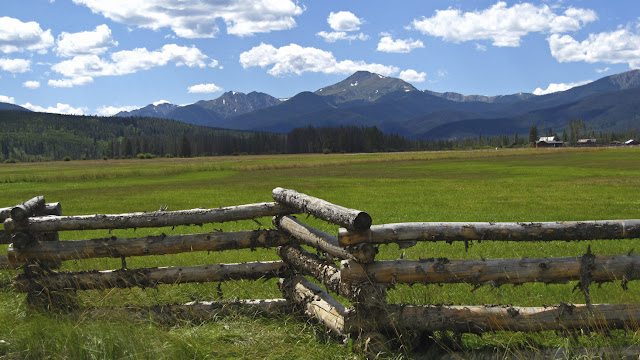 ...And looking to the west, Byers Peak and its namesake wilderness spread out across the landscape

*******************************
Sunday morning was considerably cooler, but things started to warm up reasonably so the long sleeves, arm warmers, and such all stayed packed.  The plan was to run up the Vasquez drainage and work around toward the ski mountain, then run the forest back along toward town.  We started climbing immediately, which was actually OK given the chilly start.  The run up Blue Sky trail was mostly shaded, and I must admit my arms and hands were cold when we popped out of the forest at the top of the climb - where did that come from?   We stopped for a minute to give directions to a group of mountain bikers and standing in the sun for a few helped get the temperature regulated again.  Oh, and they asked if we would be running barefooot next time.... I don't think so! 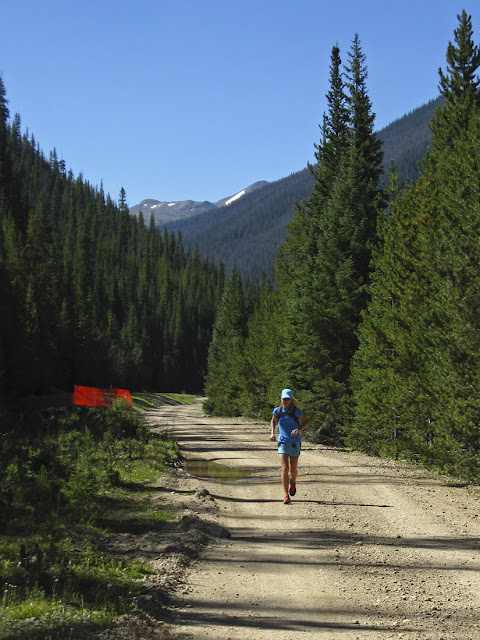 Enjoying the sun with Vasquez Peak Wilderness in the rearview 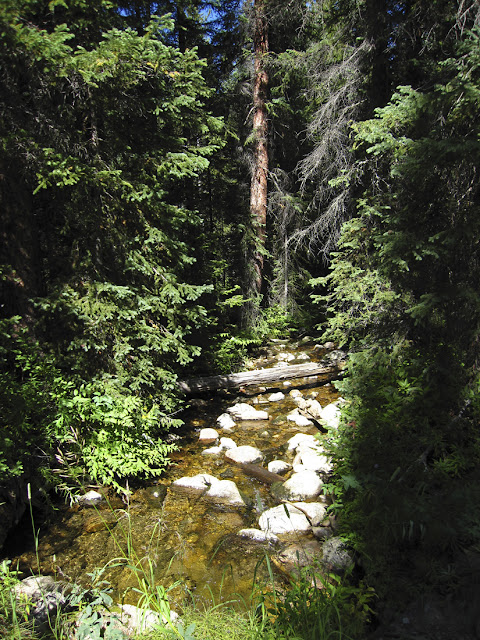 Upper section of Vasquez Creek, a mere trickle compared
to when we last saw it in July

It was really a nice change of pace to run the Tunnel Hill dirt road as it rolled across the forest on its way over to the base of the ski mountain.  We were surprised at the camping activity over the weekend - exponentially more campers out in the forest areas than were out in July.  But for the most part, it was quiet and peaceful running along the mountainside - before you knew it, we were at the ski area. 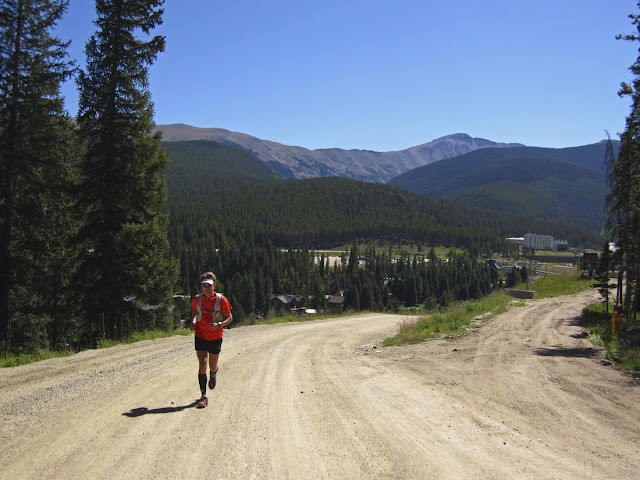 From the road we dropped into Serenity Trail, one of the coolest forest singletracks, running from the ski area over to the Little Vasquez road area.  It is a tight, rolling trail through dense forest - I tried to video it while running, but I will spare you the nausea and continue to work on my film making skills some other time! 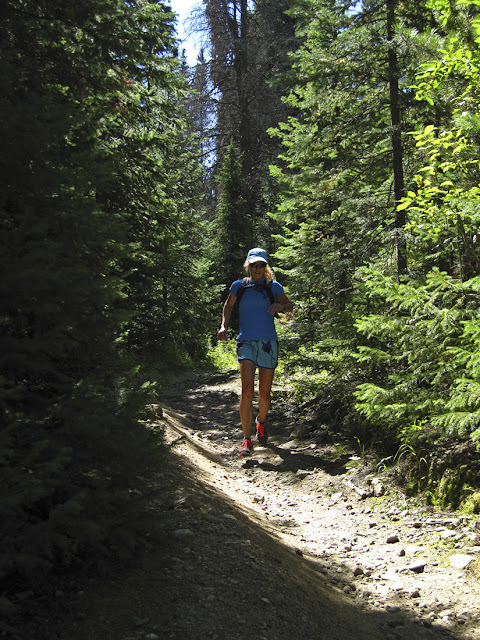 Finished out the run for the day on Ice Hill and Twin Bridges trails, with another 14 miles of altitude training in the books.  While we had not intended to split the valley into halves for our runs, it worked out well as the long point to point was not feasible this trip.  Since the USFS is logging extensively for wildfire mitigation, the D2 / D4 / WTB trail matrix is closed, so the primary connecting links from ski mountain to valley are shut down and would have made the long run much LONGER than normal.  The two days we spent on the trails were splendid and will tide us over until next season for the high country.  We had lunch and then "people watched" for a while at the ski area while having a nice cup of coffee and soaking in the sweet mountain rays! 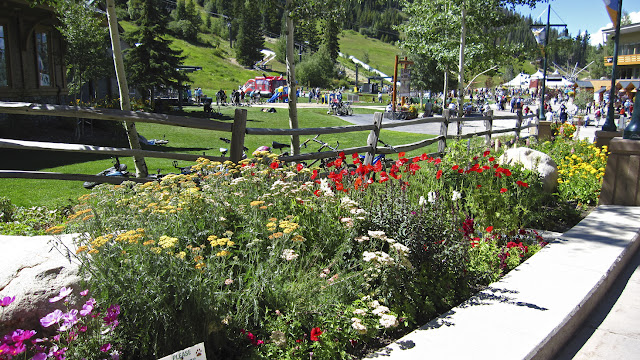 Parting shot at the base of Winter Park Resort -
Flowers still in bloom, but their season is coming to an end... 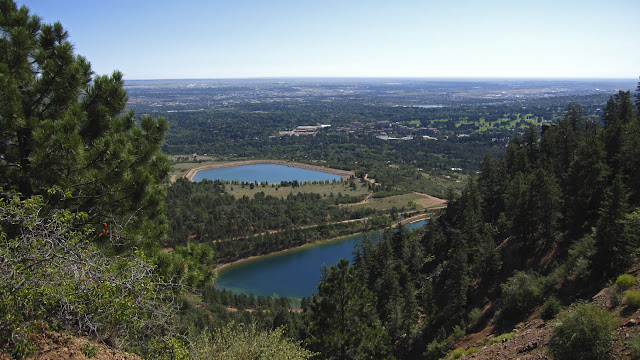 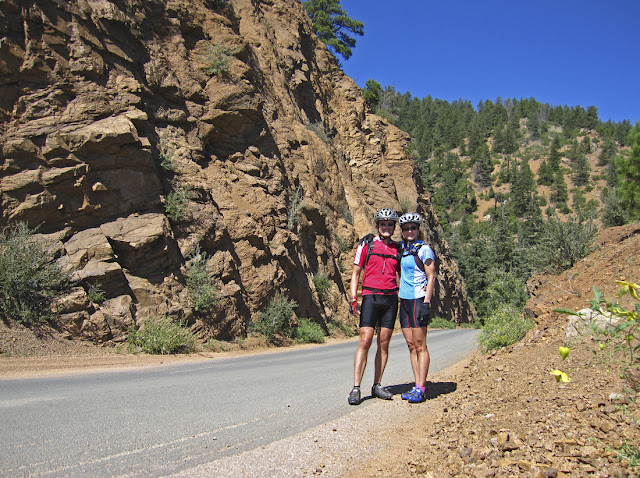 Happy Trails at the top of the climb - Gold Camp Road

After coming down from the mountains Sunday night (miss out on that holiday traffic jam on I-70....), we had plans to get in a good road bike ride.  We have found over the last months that mixing in the riding with our runs has helped immensely with Kathleen on recovery between outings.  Since the stress of running at altitude has a bit of a magnified effect on the Graves symptoms right now, we knew that a third day straight of running up high (9000 -  10,000 elevation) was not as good of an option as a ride down low at home at 6800 feet.  We headed out on the bikes under perfect conditions (again!!!) and rolled through the Garden on our way over to Gold Camp Road.  We were surprised again that bike traffic was quite low on GC, especially since it is a favorite for tempo/time trialing hill work with local bikers.

After pushing a steady pace for the entire ride and pushing extra hard up the 4.5 mile GC climb (and two days running in the mountains), the legs were starting to feel pretty shot on the way home - but you have to maximize your days, right???  We made our way back up the west side of town, enjoying relatively slim traffic on the city roads, and landed ourselves at a table at the neighborhood Starbucks for an attempt to resuscitate our tired bodies with some good caffeinated drinks, all the while reminiscing about another weekend of great mountain exploits.  Our 30 mile ride provided the perfect bookend for a great weekend!  My mind is wandering as a pot of homemade meatball vegetable soup is simmering on the stove and smells soooooo good - hope I can wait until tomorrow's lunch . . . .